So when we moved into our house we noticed the neighborhood next to us had a members only pool.  The thing backs right up to our house. We can see the pool complex from our deck.  The summer after we moved in we were extended a membership, and it

was worth every nickel.  Even though we were from the other side of the tracks so to speak we got to be members because we are a “border home.”  We are a buffer between the nice neighborhood where the pool is and the unwashed, knuckle dragging, masses that roam the streets of our neighborhood devouring children for afternoon snack.  This is only important in that I think the kind of conversations going on at the pool are a result of that better side of the tracks environment.  In other words some of the stuff the locals talked about whilst pooling was not remotely close to anything I had ever experienced.

Fast forward to the summer of 2010.  Frank is 14 months old and had some swim lessons at the UT pool on campus when he was about 8 months old.  Swim lessons – float around in a swim diaper and get used to what it feels like to pee in a large body of water.  Mark Spitz he ain’t, but he experienced the pool so I figured he’d be good to go for the summer.  See picture below.  Google Mark Spitz young people. 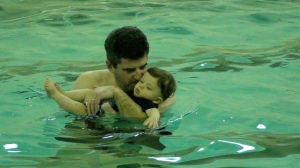 The summer was going to be great.  We could hit the pool most days, take lunch, hit the whirlpool tub to get the chlorine off, and he’s napping the rest of the day away.  For the most part it went that way.  However the very first day we go to the pool things got very interesting very quick.  We roll up to the pool, I’m pushing Frank in his stroller, and I identify two distinct factions of people.  No, no, check that; two distinct factions of women.  This little complex had a large pool surrounded by beach chairs and a small kiddy pool right next to a covered patio.  At the far end of the big pool on the chaise lounge chairs are the co-eds.  Same shape, same size, same age, and same type bathing suit.  5 blondes and a brunette, early 20’s.  This is the forbidden zone for obvious reasons.

Around the kiddy pool and occupying the patio area were the soccer moms.  It was a mixed bag of shapes, sizes, ages, and swim suits.  Since I fit that exact description, and for a lot of other reasons, I figure that’s my group.  Beside the fact that these women are my age bracket, they are all experienced moms.  If Frank takes a header, sinks to the bottom, drinks his own pee, whatever, these women will know what to do.  So I grease Frank down with SPF 65, put on his sunglasses and hat and we head to the kiddy pool.

We are not welcome.  It’s obvious instantly.  My spleen withered under the glares we were getting.  But you know what, I’m not going near the forbidden zone so we get in the kiddy pool.  The soccer moms were in deep conversation; probably why we got the cold shoulder.  They were discussing the co-eds and their bodies having been enhanced by modern medicine.  The soccer moms were not in favor and they were positive they could pick out the young gals with the enhancements.  It’s no win for me.  Anything I do and I’m the creepy 40 year old who lives behind the pool.  So, on to the big pool.

Frank wanted to go to the big pool anyway.  We stay in the shallow end, a good distance from the forbidden zone.  Frank is digging it big time.  He’s slapping his hands in the water, laughing, talking up a storm.  For some reason unexplained to this day his right arm goes straight up and he starts to ramble, loudly, facing the forbidden zone.  He’s like Caesar, minus the toga, and he won’t quiet down.  He goes on for several minutes.  Well, the girls in the forbidden zone start to look up and one of them engages Frank.  She starts with the “oh how cute” then “what’s his name” and then she alerts the others.  This is getting bad.  They all decide to get a closer look and begin sliding into the water like gators easing into the river for a sure kill.  Yeah, I’m going to be the creepy guy for sure now.  They make their introductions with Frank and move to the side of the pool; enhancements facing the soccer moms.  There was a real West Side Story, Sharks vs. Jets feel about the whole thing.  Look it up Kraslwasky.  They then continue the discussion they were having before Frank laid down a sermon.

Apparently the soccer moms were right.  Several of the forbidden zone girls were talking about their enhancements.  Two of them received their implants as college graduation gifts.  Now that’s a whole different conversation for a whole different blog but they seemed very pleased with the outcome.  Frank and I started moving to the stairs, time to go.  Lunch is calling.  All I can think now is dear God please don’t let these crazy, clearly uninhibited kids ask me my opinion.  The girls see us leaving and begin waving and saying goodbye to Frank.  We get a few more “he’s adorable” and we’re gone.  Collecting our things by the patio and again with the stares from the soccer moms.  They all but blurted out “Creepy Guy!”  The pool area is not for the feint of heart.  I received more education in that hour and a half than I did my entire time in the military.

The chick magnet and his creepy father.

Two days later Tracy and I are walking in the hood with Frank.  A BMW screeches to a stop next to us.  Two blondes look out and start yelling hi to Frank.  He looks, smiles, and goes back to his juice cup.  The BMW pulls away, never acknowledging me or Tracy.  Now I’m getting the stare from Tracy.  It’s his pool posse I said.  Yeah that went over like a fart in church.  Damn you forbidden zone girls.

Undeterred, we went to the pool several times after that.  Some good stories came out of that summer and the next, but not much will top Frank’s first trip to the other side of the tracks.