Frank’s Place got rolling late in 2011 but we’ve made good use of our time.  Not every post has been golden.  Honestly some were real stinkers, but a few really stood out and got some attention.  So below is a list of links, each with a quick review, that will take you directly to the posts that got the most attention this year.  It will also serve as a little review of the original posts for some of you that have not been with us from the beginning when we were at that den of thieves site also known as google blogger.  Not surprisingly the Diary posts are most popular.  They are in order of popularity based on how many hits or visits each received.

I See a Second Heartbeat    No doubt the most popular post on the site.  It got 159 hits on December 7th.  A new baby on the way is always a big hit, 2 babies at the same time, well that just takes the cake.

The Pool, Soccer Moms, and the Co-eds  This was an early one and really got the site rolling.  Nothing like conflict and implants to get a conversation started.  Perverts =P

State of the Union Speech take down  This one baffles me a little bit.  Almost devoid of humor and full of me ranting about the shameful behavior of congress during state of the union speeches, it still ranks 3rd all time for hits/views.  You people are weird.

Franks takes on Occupy Wall Street  The most recent post and my first hybrid.  It mixed some politics in with a Diary entry.  It also hit a nerve.  It got 105 hits over a two day period.  Also most comments on a non-baby announcement post so far.

The Kroger Lady   The second post on the site, an oldie but a goodie.  This was part of the first chapter I ever wrote for the book and really became the flicker that stoked the flame for the blog.

Frank vs. the Presbyterians  Thought I may get excommunicated with this one.  It became a hit, 80 views in one day.

Down Goes Cain!  The only other political post to make the list, I think more for my thrashing of Cain campaign manager Mark “blockhead” Block than anything else.

Honorable Mention – or bragging, or, …whatever:

Buddy Roemer  This one gets a mention because of the one and only response to it.  A dude running for congress in California commented on it with a spamming of his campaign message.  I left the comment there.  Somehow that vaulted this particular post to 2nd on Bing’s search engine list when Buddy Roemer’s name is entered.  From that a member of Roemer’s campaign staff read the blog post and now Roemer’s campaign staff is following me on Twitter.   That’s pretty cool, you know, in a nerd cool kind of way.  HUGE UPDATE:  franknfran.com has taken the top spot on Bing’s search engine when using the phrase ‘buddy roemer blocked from debates’.

It”s been a great year at Frank’s Place.  We’ve had a lot of fun.  2012 looks promising if only because of frik and frack, the twins due in June.  I imagine we’ll have proper names for them by the time they get here.  Needless to say they should provide a lot more material for Frank’s Place.  Not sure when I’ll have time to write it but that’s a bridge too far at the moment.  We still have a ton of material from the last few years yet to make it to print.  Of course the political scene will be heating up so we’ll definitely have much to say about that.  For those wondering, we will not be re-naming the site upon the arrival of Tom and Larry.  Frank’s life will change enough when Laurel and Hardy are born, his blog site will not.

So Happy New Year y’all!  Thanks for reading my nonsense and making this so much fun.  See you in 2012. 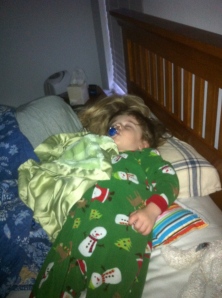 Sorry Dick Clark, I got to blog in the morning. Time to get some shuteye! HAPPY NEW YEAR!