So Frank has a great head of hair.  His hair was a modest rug when he was born but it grew in quickly.  That is a trait that runs in my family.  My dad had a great head of hair.  Of course he’s 80 now and bald on top.  My hair grows so fast and thick, by week 5 of basic training I already had a good stubble going up there.  By graduation you could just about see the natural part.  That was from being skinned on day 1.  After surviving the threats from the Drill Instructors about shaving my head again for graduation, I left Lackland AFB and started my military career with almost a full head of hair.

These are the hair genes that Frank has inherited.  As you’ll see from the pictures below, we let his hair grow out, a lot.  I didn’t think I would be cool with it, but the more it grew the more I liked it.  What’s cooler still, he really got hooked on Bon Jovi once he started listening to music.  Well Bon Jovi and Frank Sinatra.  Living on a Prayer and Girl from Ipanema are his favorites from those respected Jersey superstars.   Click the titles to listen.  When he started mimicking Bon Jovi’s moves in the video and using his golf club as a guitar, well we just couldn’t cut his hair.

We may have let that go a little too long.  He really couldn’t see.  That was even after I cut him a little window across his bangs.  I did it while he was in the tub.  It didn’t look bad but it wasn’t salon quality either.  Of course I was operating under the assumption that it would grow back pretty quick so it really didn’t matter what I did to it.  The shame would only last a little while.  For once I was right.  It grew back in a week.  So the time came, we had to get it cut.  Here is the only  before shot of his natural hair, untouched since the day he was born.  He is almost 2 yrs old in this picture. 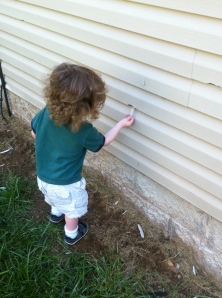 My son is under there...somewhere

I was going to make it all grainy, like those fake pictures of Sasquatch running across a river in Siberia, but I think this picture stands on its own.  That is Frank under there.  He is inspecting the storm damage the morning after all those tornadoes ripped through the South.  We got hit with the tail end of the line of twisters that took out Tuscaloosa, Alabama.  This was the day or two before he got his first haircut.  Maybe the gods were trying to tell us something.  Anyway we didn’t listen.  We took him for his first haircut.

It went as well as can be expected.  Some tears, a quivering lip, me holding him for a while as a good friend and great cutter of hair, Courtney, gave Frank a nice trim.  A curl was recovered from the scene for pressing into a scrapbook.  It was not a full blown haircut mind you, but those curls you see never returned.  Now when we let his hair grow it just goes straight down his back.

Here are a few pictures below documenting Franks hair genealogy.  Be kind to me, I liked my hair like that.

Here are Frank’s great grandfather and great grandmother, James and Jenny Linardo hitting the boardwalk in Atlantic City NJ, September 1928.  That’s a nice head of hair right there folks and a good window into the future of Linardo heads of hair. 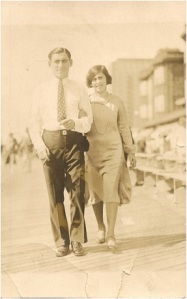 This is Frank’s grandfather, my dad, Francis John Linardo, circa 1930.  Another great head of hair.  Also some similarities in expressions emerging between grandfather and grandson. 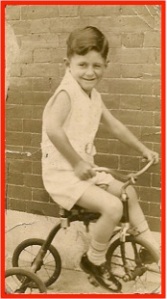 Here is a better shot of my dad’s mop.  That’s righteous.  Graduation picture from Roman Catholic High-school in Philadelphia, 1946. 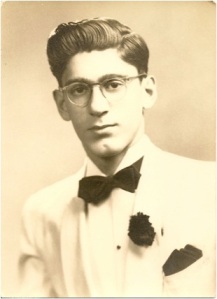 Finally a picture of my rug, 1980ies-ish.  Not nearly as neat as my predecessors but just as full.  Often referred to as the “Mr. Kotter”, mostly by my wife, it was the style of the times.

Frank getting his first haircut.  He did well.  It was tough to watch those curls hit the floor.

He has had 3 haircuts since the first.  Here is the latest.  It’s also the first “full” haircut he’s ever had.  It went short enough to make the teachers at school fuss over him for several minutes the first day he showed up with it this short.  He is celebrating his first full haircut with the ceremonial “eating of the broccoli.”