Well this is it.  Super Tuesday: 10 states, 437 delegates at stake, for some, and 24 hours of pure excitement.  OK, maybe not a lot of excitement for most, but definitely for me.  For ease of information there is a chart at the bottom of this post with the states involved, their delegate count, and links to their state election boards or GOP leadership, incase you want to read up on how a particular state will handle tonights election and it’s delegates.  You can see the same chart by clicking the Primary Voting Schedule link to the right.

Was really hoping to stand in line with Frank on election day but the little patriot took ill and camped out in bed with his mommy.  So I forged on alone to Blue Grass Elementary school to cast my vote.  Wanting to see a big crowd, meet some people, and do a few interviews but apparently 1:15 in the PM is a great time to vote if you want to be the only one in the joint.

I did catch these folks getting their democracy on.  But in a heartbeat they were gone.  Then it was just me and ten machines of pure American democracy.  Feel the power!

Leaning left - must be an Obama man

Not sure if taking photos in a polling place is legal.  If it’s not then I didn’t take these I found them on the street. 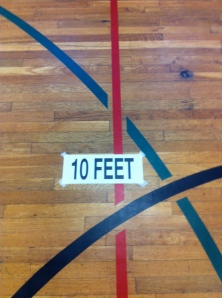 Couldn’t find anyone who wanted to go on the record, so I cast my ballot and shot home to take care of my own little sick ward.  Going to be a fun night tonight.  But as I have said in the past if you’re not fired up about tonight, no problem.  I’ll be fired up enough for all of you.  Check back throughout the night for updates.  Several polls, including the polls in TN close at 8.  Look for Ohio and Tennessee to take a while to count.  Latest polling shows them locked in a dead heat between Mitt and Rick.   But several states will be called early like Virginia and Massachusetts.

As usual we’ll be on top of it here at Frank’s Place.

I want to give a quick shout out and say thanks to all the new followers of Frank’s Place.  Thanks for letting me invade your inbox every so often.  If anyone wants to join these brave few, put your e-mail address in the box on the right and the second I hit “publish” on a new post it’s in your e-mail, almost as fresh as a Krispy Kreme doughnut hot off the belt.