So we still had Frank’s monitor on in our room at the 7 month old mark.  One night I awaken to the sound of a dog choking on a chicken bone.  I felt that was weird because for one thing we had pizza for dinner that night and more importantly, we don’t have a dog.    A quick peek at the monitor and I see Frank standing up in his crib barking.  My first thought was what the hell is that kid doing and why is he doing it at 3 in the morning.  Then I heard the wheezing between the barks.  He can’t get his breath.

OK, now I’m up and adrenaline rushing to the point of being able to lift a car.  You hear that story a lot; a mother seeing her child in danger lifts a car off of them.  I’m not saying I could lift a car but I went from snoring to wide awake in 0.3 seconds.  Haven’t done that since boot camp; some 24 years ago.  Age, in this case, only matters on the backside of the rush.  The dreaded come down is going to hurt, bad.  But at the moment my 7 month old son is smiling and wheezing like a 77 year old asthma patient at the same time.

Tracy calls the pediatrician’s on call nurse.  She can hear Frank wheezing over the phone and Tracy was out in the hall way.  There was a bunch of description of symptoms being exchanged and some discussion but then I hear “go to the ER.”  Good enough for me.  I switch into what Tracy likes to call task mode.  Children’s Hospital in Knoxville is probably 15 minutes away, but at 4am it was more like 8 minutes.  It’s possible I bent the speed limit a tad as well.

No waiting at 4am.  They took Frank right back.  They checked him out, gave him something to help him breath a little easier, and we laid down in the exam room to wait for a bed.  He was being admitted.  Frank was getting his first trip to the hospital since he was born some 7 months prior.  At the age of 44 I have yet to spend the night in a hospital.  And no, I’m not superstitious.

We get to a room and are given the diagnosis, Respiratory Syncytial Virus, or RSV.  This is one of those times it’s advantageous to have a child so much later in life.  I have heard of RSV as several of my friends kids had it.  It is more serious for babies and Frank was only 7 months, but it was in no way as bad as first time parents could imagine.  Our blood pressure and guilt started to subside.

I don’t know about y’all but with Frank I go right to worst case scenario when he gets sick.  This is a new thing for me.  In regards to my own health I am much more dumb and dangerous in the other direction.   I never take my own illnesses serious enough and they become much worse than they would have.  Since having Frank I’ve become an old Italian lady, I worry about everything.

Distracted easily, I noticed a children’s hospital room has some cool equipment.  I mean Frank didn’t think it was all that cool, but what did he know, he was only 7 months old.  The coolest thing was what Frank hated the most, the snot sucker.  This is an air driven vacuum hose they put up one of his nostrils while feeding saline solution up the other; essentially the industrial grade version of the little squeeze bulb we all have used to clean the nose of a child.  Big difference here, the air powered one actually works.

That sucker cleaned Frank’s snot-locker in like a minute.  Sure he yelled loud enough to make a dolphin’s ears bleed and the first nurse to do it to him cried the whole time, but drama aside, the thing made it seem so effortless.  I would have to use a squeeze bulb for an hour to get the results that thing did in a minute.  Tracy was reading the look in my eye, “You know Babies R Us sells battery powered versions of that.”  My head snaps toward her like, “Why don’t we have one?!?!”  We do now.

Frank recovered from his first nose clean-out quick enough to make eyes at the cute nurse who was beside herself for making him cry.  They hugged it out and Frank watched her with a smile until she left.  That scene would repeat itself with every nurse who came in.  It got so bad that even Tracy noticed it and asked me if I’ve seen him eyeballing the nurses.  Kid’s an animal. 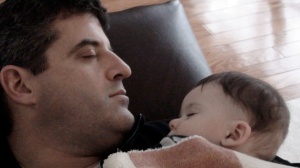 Sleeping it off after discharge from first hospital stay

Overall he spent essentially 2 days and 2 nights in the hospital if you count going at 4am “night”.  Tracy stayed with him over the second night and he was released the next day.  He did great in the hospital.  He got to sleep on mommy, although that meant Tracy didn’t sleep much.  However I guarantee you she would love to have him do that now, as he is getting past the age of wanting to curl up with either of us.

Frank did have some visitors during his short stay.  Good friends Marisa and Becky came by to see him and look after Tracy.  That was and is always comforting, thanks guys!

It was the second week of December so as we were checking out we ran into Santa Claus in the hallway and he gave Frank a stuffed dog even though we were leaving.  It was neat and Frank still sleeps with Dog to this day but it was a stark reminder of how lucky we were.  There were kids on that floor not going home for Christmas.

We also learned how to use a nebulizer, which delivered medicine directly to Frank’s lungs in a mist type fashion.  We were told it would probably be a battle to get him to keep the mask on.  It was…because he wanted to put the hose directly in his mouth.  Well, he sucked on the hose for the entire run of the medicine, 7 minutes a treatment, a few times a day for 10 days I think.  Pediatrician just shook her head and told us that’s the most effective way it’s just a little unconventional, as in not normal.

Hmm, unconventional, so he does have some of my wife’s family DNA after all.