So two months after his second birthday, Frank was back in the hospital.  This time it was for a cyst that had grown over his right ear lobe.  We noticed it a while before but didn’t think anything of it.  One time I got the urge to give it a little squeeze and out popped the head of an alien.  Sort of.  It was more like tiny packing peanuts.  No, probably closer to the fluff-n-nutter stuff kids use in place of jelly on PB&Js.  Oh yeah, if you’re eating, skip this part.

So once I see other life forms come out of this thing I alert Tracy and she calls the EN&T.  One of the travesties of living some of my adolescent and all of my adult life in the military: I had no idea that EN&T meant Ear, Nose, & Throat.  A minor factoid Tracy holds over my head to this day.  Not really, I’m just starting to like playing the victim.

The last time we went to the pediatrician Frank was screaming as if someone was slowly ripping off his fingernails.  And that was in the waiting room.  I was bracing for wrestle-mania III taking Frank to this EN&T dude.  Yeah, wrong again.  Frank sat there like a little angel while EN&T boy poked, prodded, pulled, and otherwise put the cyst through the wringer.  This guy used all the instruments our pediatrician did and got not one peep out of Frank.

What we did get was a diagnosis, the ear lobe stopped forming and this cyst formed in it’s place.  Underneath was an empty space that the cyst would continue to fill.  Infection was the big issue.  It had to come off.  That meant surgery, and surgery meant putting Frank completely under.  Once again in his first two years of life he was going to experience something I never have, anesthesia.  Big show off.

A little backstory.  Frank is one righteous eater.  I think I have mentioned before that he’ll take down an egg roll or ravioli or an enchilada with equal ferociousness.  It is not uncommon for him to pass over chocolate to grab carrots or broccoli.  Kids a circus freak.  If he could grow a beard I would put him in the circus.  How much could we charge people to see a bearded two year old take down broccoli spears two at a time?

Anyway, I say all that about the eating to say this, anesthesia means fasting the night before.  No food, no drink for 12 hours before the surgery.   I wasn’t really sure how that was gonna go.  The one thing Frank is doing if he’s not sleeping is eating.  When children go in for surgery they tend to schedule them by age in ascending order.  So the littlest kids go the shortest amount of time without fasting.  In theory.  Frank was two so that put him mid morning for his procedure.  At worst he should only miss breakfast and then possibly 2nd breakfast before they knocked him out.

We fed him a little later than usual and gave him some juice right before he went to bed.  Then we prayed, not for his safety but for his belly.  He woke up in the morning and wanted to eat.  I don’t remember what song and dance routine we used to distract him from that but whatever it was it worked.

Get to the surgery center and check in and we’re told it may be a bit of a wait.  There went 2nd breakfast.  They had toys in the lobby so he played right through 2nd breakfast without noticing.  We get called back to begin prep and then are told to go back out because there is a bit of a log jam.  Now we are threatening lunch.  We finally get back to the pre-op area and we wait some more.  They bring out the crayons and such and Frank seems ok.  We are now approaching 16 hours since he last ate.

At the 18 hour mark the doc comes out to say he’s bumping Frank for some of the easier cases.  Frank’s deal will be a little more involved he says, so we want to get the other kids through.  Now Tracy is the medical brain in the family so I don’t intervene in this kind of stuff.  But one thing I do know is food and bellies, and bellies lacking food.  So I grab EN&T boy’s arm and impress upon him that the lad is now passing 18 hours without food or drink, how much more do you think he can stand?  Frank wasn’t out of control but he was getting whiny and would no longer stay put.  Amazing how crayons fail to hold a kid’s attention when he’s almost gone an entire day without food.

They still bump him but they start to prep him and give him “silly juice”.  If I’ve confused you with all that technical jargon, it’s commonly called Versed.  This is supposed to suppress his anxiety about being rolled away from mom and dad and having a mask put on his face.  I have no idea if it did that, but it did turn him into a raving lunatic.  All of a sudden everything was funny.  Even stuff that might normally be tragic was gut busting hilarious to him.  I offer these photos as evidence. 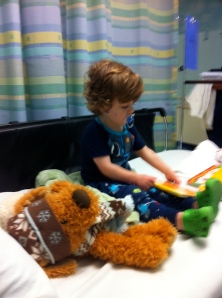 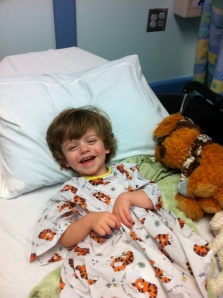 He had no idea he was being rolled away.   He disappeared behind the doors and we went out to wait.  After an hour or so the nurse comes out and says he’s in recovery and once he wakes up we can go back to see him.  She warned us that he’ll be hysterical for about 30 minutes and there is just about nothing you can do to soothe him.  It’s just one of the side affects of using anesthesia on kids.

He wakes up, they take us back, and he’s just sitting there with the mother of all bed heads.  It was an industrial strength cow lick up the left side of his head.  But no crying, no hysterics.  When he finally focused his eyes he sobbed a little bit and wanted me to pick him up.  The nurses untangled all his hoses and handed him to me while I sat in a rocking chair and he was fine.  The few whimpers he did make were so pitiful because he was so hoarse it made me laugh, almost uncontrollably.

After about 5 minutes a nurse brought him a banana flavored popsicle and that’s when the party started.  He was knocking those things down faster than they could bring them.  And since he was the only kid back there not crying, the nurses were lined up to take care of him.  He looked like a stoner too.  He easily could have been an extra in Up In Smoke.  Look it up.

He was in his happy place and then some.  He’s quite the drama queen as well.  His hand was wrapped to keep his IV in place.  The surgery was on his ear.  Yet for two days he held his hand like it was reconstructed by the guys who reworked the Six Million Dollar Man.  Look it up.

He didn’t give us much trouble after we got him home.  He picked right where he left off as far as eating and after a day or two he was right as rain.  His hand even magically started to work again.

I could have used a gallon of the silly juice to go though.

7 comments on “Diary of a Stay At Home Dad: Hospital Visit II – Enter The Silly Juice”