Well by now most of y’all are aware that my daughter Anne Marie was born three and a half months early and weighed in at 1 pound 12 ounces.  She shed 3 of the useless ounces the next day.  So on March 23rd she was 1 pound 9 ounces and measured 12 inches long.  (You don’t get a height when you’re that small only a length.) It was going to be tough sledding to say the least.

The sledding has been good so far.  Today, 21 June, she is 6 pounds 6 ounces and 18 3/4 inches long.  Since they don’t weigh her until late in the evening, it’s possible she is heavier than that right now.  To give you some perspective, my son Frank, the name sake of Frank’s Place, was born 1 week early and weighed  6 pounds 9 ounces and measured 19 inches long.  He stayed in the hospital for the normal 2/3 days.  Anne Marie will hit the 3 month mark in the hospital tomorrow.  She’s building serious honors points on her Hilton gold card.   If and when she checks out of the hospital she will weigh much more than Frank did.  The track she’s on now will most likely put her past 7 pounds.  So according to Tennessee Fish and Game, we don’t have to throw her back.

Here’s the most recent photo shoot.

Nice chin dad, all three of them. 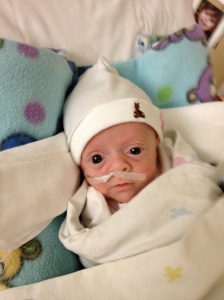 Hey! Can a sister get a little shut eye.

The only thing jamming up the works right now is her feeding.  She has to be able to take a bottle for every feeding.  That means going against the age old adage, “never wake a sleeping baby.”  Premies can’t miss a meal, they have to eat which means waking her up.  If she’s too sleepy to engage the bottle, she gets it through the feeding tube.  We obviously can’t do that at home so she’s a captive until she can go a few days straight of taking a bottle at every feeding.

One thing she has no problem with is filling her diaper.  Holy cra…. I mean wow, she can really punish it.  I have heard the jokes about how can such little people produce such abnormal size steamers.  But Frank never really did that.  I’ve been changing his diapers since day one and I never really stopped and said whoa, that’s bigger than his head!  His diaper was always the normal amount of disgusting, dry heave inducing, waste.  Look people I’m just not going to say poo, I can’t do it.

Besides poo wouldn’t even come close to doing justice to what Anne Marie has been up to.  I finally made it there to visit her during the day time hours.  I’m usually on the night shift, thanks Lauren!  I picked her out of her crib and she smelled more like butt than usual.  When I sat down with her the dank odor really started hitting home, plus I realized her clothes were wet.  Time to change the diaper.

It was epic.  It was everywhere.  It was the color of pistachio.  In solid form it would have easily been bigger than her head and that’s a trick for a preemie.  Their heads are freakishly big compared to the rest of their bodies.  Although her head to body ratio had started to even out when she crossed the 6 pound threshold.  She hammered that diaper.  Of course it doesn’t hurt that she’s on a protein supplement with her formula.  So, you know, if a world record had been set it would have come with asterisk for illegal supplements.

Two positives from the pistachio diaper: it took me forever to clean her up because I had to deal with the rolls of fat on her belly.  Changing her diaper two months ago, her body fat was exactly zero.  Her legs had filled out and they were kicking in the most uncooperative fashion for the level 5 toxic spill we had going.  Two months ago they were spindly tooth picks, I was afraid I was going to break them, and I could over power both legs with two fingers from one hand.

The moral: in every pistachio diaper there is a silver lining.