Really Frank?  You turned so quickly.

Anche Tu Francesco is, of course, the Italian phrase for You too Frank?  I knew Tracy was against me, but not you.  I thought at worst, with Anne Marie coming home soon that it would be two against two, but now it appears I will outnumbered three to one.

At the moment of truth Frank came up short, well short.  It’s uphill sledding for me from now on.

See, we moved Frank into his new room so Anne Marie could have the nursery when she comes home.  I re-painted, did a built-in shelving thing in the closet, steamed cleaned the carpet, refurbished a dresser Tracy had when she was a kid, and hung a valance with little airplane finials.  In the midst of moving Frank’s stuff over to the new room a heated debate broke out between me and Tracy over placement of said stuff.  This is where Frank cut me to the quick, put it right in my back and twisted. 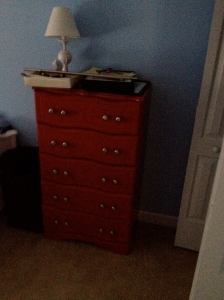 Refurbished Dresser – one of the puzzle pieces

His new room was big enough that we could move all his stuff in and also get his Thomas Trains in there.  This would free up some serious space in the bonus room.  To do that, the spacing of his furniture would be important.  The bed was set, the issue was over the dresser and, god help me, a bean bag chair.  I won the debate over the dresser placement, I think.  Tracy always reserves the right to revisit and recant when she doesn’t get her way. But the bean bag chair was in a spot that would have used up a lot of Thomas Train space.  So I objected.

I threw down a good argument with sound reasoning and logic, to include spacial orientation, etc..  I went one question too far.

Why does he need his bean bag chair in here, I say.  Tracy: He needs a place to sit and read.  Me: What?! accompanied by corresponding eye roll that screamed He won’t sit there and read, he probably won’t even sit in in period.

Mere minutes into the resulting discussion, his royal highness walks in and sits in the beanbag chair.  Then the little #$^^# goes across the room and sprints, jumps, and lands gracefully onto/into his beanbag chair.  Wait it gets better.  While Tracy is barely trying to stifle an “I told you so” grin, Frank gets out of the beanbag chair and grabs a book from his nightstand.  He saunters over to his beanbag chair, sits down and starts to read!  HE CAN”T EVEN READ!!!

Tracy was not even stifling laughs now.  It was full on gloat time.

It was a crushing blow.  Most blindside attacks usually are.  I was staggered from the impact thus unable to get off a retort, mean spirited or otherwise.

At what point does argument destroying logic become pointless if the little _____ is going to just scuttle the whole thing with an act of treason?  The way I see it I have two choices.  I can just give up, accept my fate of being always outnumbered, always on defense or I can step up, adapt, and overcome my little Judas.  I’m usually way too lazy to step up.

The bean bag of shame – my waterloo

This could be problematic.