OK so the kid has decided she doesn’t like the feeding tube.  We thought she had gotten over this pulling out of tubes business a while ago.  She went on a tear a month after she was born and literally pulled out whatever tube they put down her throat.  Ventilator, stomach gas exhaust tube, feeding tube, you name it; if it was down her throat she pulled it out.  After she pulled out the ventilator for about the fifth time the docs said leave it out.  That’s how she came off oxygen assisted breathing, not because it was a pre-ordained time in the development of a preemie, nope, she decided it was time and just kept yanking it out.  Same with the gas exhaust tube.  But then she sort of calmed down with all this yanking of tubes.  Of course she no longer had the ventilator and exhaust tube to yank anyway.  The feeding tube was a different matter.

I mean, she still pulled it out but it had to go back in.  The nurses looped it down her nose instead of through her mouth and that seemed to pacify her for a while anyway.  As I’ve said countless times already I’m sure, preemies can’t miss meals and if she won’t wake up to eat or gets too tired to take the bottle, the formula goes in the feeding tube.  If you have ever smelled the stuff then you might ask for the feeding tube anyway, as it bypasses the taste buds.  But in the words of her 3 year old brother Frank, Anne Marie can’t like the feeding tube. 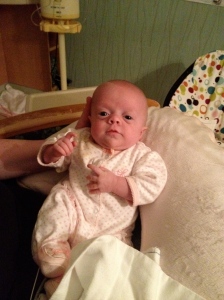 No Frank, no she can’t like it.  Which is probably why she has gone back to pulling it out.  About two weeks ago she pulled it out and it got to stay out through one feeding I think.  I posted a picture on FB and forgot to mention the tube would be going back in.  Folk thought she had passed another milestone.  She didn’t then but now it appears she may have.  She yanked the tube out Friday or Saturday night I think.  Trust me, when I tell you the days all run together now, they really do that’s not my usual exaggeration.  Anyway, out it came one of those nights and like the ventilator the docs said “screw it, leave it out.”

She has taken the bottle or the boob ever since, and taking close to 3 ounces at a feeding, that’s about 90cc for y’all in the business.  That doesn’t sound like much but we started at not very much so this is huge.  If she can keep this pace up Frank may be seeing his little sister face to face for the first time next week.  She is still having heart rate issues at random times, although the events are occurring less, they are more severe when they do happen.  That’s the big hurdle right now.  But I’ll put my money on a kid that can pull long tubes out of her belly and through her nose and not cry about it.  She’s tougher than Frank already.  Poor kid, he has no idea what’s coming.

The statistical update is as follows: 7 pounds 9 ounces and 20 inches long and to her mothers delight hanging on to her blonde hair and blue eyes. 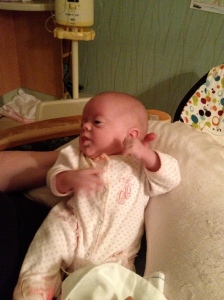 Hey is that dinner!

13 comments on “Diary of a Stay At Home Dad: Feeding tubes are for six pounders!”