Hard to believe, but we have arrived at the moment of truth.  Today we start the process to bring our daughter home.  March 22nd seems like forever ago, but it’s really only been four months.  A lot has happened in that time.

A life has come and gone, leaving us to forever wonder why it had to be that way.

A 1 pound 9 ounce daughter survived being born three and a half months early and an unfortunate incident where she received an adult dose of muscle relaxer meant for Cerebral Palsy patients instead of her heart medication, not once but twice. The constant pursuit of knowledge, determination to heal, and confidence of a great nurse and a young doctor were the only things standing between life and death for Anne Marie.  No insurance policy can repay that debt.

Parents learned a new phrase – one step forward, two steps back.  It’s the mantra of the Neonatal Intensive Care Unit, and for good reason.

A mother returned to her job, into a new position, and completed all the training necessary to be qualified in her new endeavor.  A father is 3 weeks into giving up a ten year addiction to Diet Coke, eat better and workout again in an attempt to be in good health when, at the age of 59 and 62 respectively, his son and daughter will graduate high-school.  A son finished his first year of pre-school, had his third birthday, and started his first summer vacation.  A brother got a new bedroom and big boy furniture, and that freaking bean-bag chair.  He learned a new sentence – “Mommy and daddy are going to the hospital to see Anne Marie!”  He’s about to see his sister face to face for the first time ever.

A Grammy prepped, put on the market, and sold her house, moving from Lexington Kentucky to Knoxville Tennessee only to find, purchase and prep her new house.  A NICU held a fundraiser and picked up a cool $1 million American, in a effort to enhance the already superb treatment they offer to premature babies.

Relationships have been forged, lifelong possibly, hopefully.  Some of the faces in the crowd at Anne Marie’s 1st birthday party will be familiar to some but not all.  Anne Marie will know them, no doubt.  Those faces were some of the first she ever saw and she’s been seeing them morning, noon and night, for the past four months.  They’ll never admit it but they are the people who literally saved her life in general and specifically on several occasions.

So today we get training on the heart monitor Anne Marie will have to wear for a few months. Hopefully it’s just a few months.  The condition that has kept her in the NICU past her due date, the heart rate drops caused by forgetting to breathe, have all but disappeared.  Her last “event” was  four days ago.  We had hoped to avoid the monitor all together but just about everyone thinks it’s better to err on the side of caution.  After everything that has happened it is very hard to argue with that logic.

Once the training with monitor is complete, we will get a date to “room in.”  That’s where you stay overnight in a room at the hospital alone with Anne Marie.  The object is for the staff to see if we can handle the monitor and Anne Marie on our own.  Will we be able to respond properly when the monitor alarm goes off and she has an “event”.  I was against this at first, but since she is coming home with equipment I’d rather get a day to learn it with the nursing staff a hallway away with their own monitor watching Anne Marie’s vitals.

Normally after the rooming in you get discharged the next day and take the baby home. However our pediatrician is off for this week so we may have to wait until Monday to bust her out.  The staff would prefer that we take her to our pediatrician a day or two after we take her home.  Could be a Friday escape but not likely.  Either way, barring anything out of the ordinary, she will be home in less than a week.

Here is how she feels about that.

You just refuse to cut those nose hairs, don’t ya pop?

I haven’t been updating her stats because her weight has not been much a concern for a while. But the little porker is almost 9 pounds.  I have no doubt she will pass Frank in weight by this time next year, or sooner.  Tracy and I really have no idea what to expect in bringing Anne Marie home, but Frank, hell he has absolutely no clue what is about to happen to him.  A few presents have arrived at the door for Anne Marie, Frank thought they were for him.

And so it begins…

Here are a few shots of what should be one of our last visits to her hospital room.  Facial expression interpreted by me. 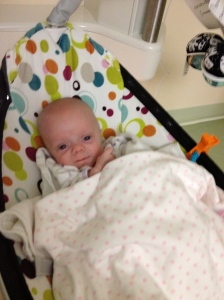 Aye matey, be a good feller and get me a wee dram of scotch will ya. Arrgh!

I said no flash photography you half a dope!