Got a little curve ball this week.  The Neonatal Intensive Care Unit (NICU) pulled a fast one on us.  We had resigned ourselves to waiting the weekend to bring Anne Marie home on Monday when our pediatrician would be back from her vacation.  We knew we had one more hurdle to jump and that was the rooming in.  That’s where you stay the night in a room alone with the baby and any equipment they may be going home with.  It’s to make sure you can handle the events and the equipment in the middle of the night should the alarm go off.  In our case that meant dealing with a heart monitor.

By all accounts this thing was a nightmare generator.  Apparently it would go off all the time and 99.9% of the alarms would be false.  Plus the alarm could wake the dead.  We were told that by experienced parents and doctors alike.  I relayed this info to the technician charged with teaching us how to use the monitor and her reply was simply: operator error.  You know, one or two people tell me the thing is a piece of junk and I might buy the operator error excuse.  But when several people, including two of the doctors who are recommending we go home with one tell me the thing isn’t great, well the operator error excuse losses a little steam.

We were going to get the chance to test the theory.  Wednesday morning we got the call, “can you room in tonight, it looks like Anne Marie may be released tomorrow?  Will that work for you?”

We quick like packed some stuff, got Grammy to cover Frank for the night, and we were on our way for what just might be, finally, the last trip to the NICU we will ever make. Even if AM gets sick now we’re off to Children’s Hospital in downtown Knoxville.

The hang up, as it turns out, was her eating.  One doctor had concerns over the amount she was taking.  She was just getting the bare minimum required per 12 hour shift. Hmmm, just doing the minimum eh?  Just enough to get by, is she?  What do you know, I guess she’s my kid after all.  Better cancel that afternoon slot on Maury Povich’s Who’s the baby’s daddy? episode.

Anyway, Anne Marie didn’t sleep during the night, hence the Povich joke – I’m fried – but she ate like a pig all night.  So that was the last thing keeping her there.  Consequently, she’s not there anymore.  She’s here.  And by here I mean not there.  She’s home. Photographic evidence below.  But the monitor performed like a champ, no false alarms, no alarms at for that matter, and that’s always good.  The rest of the rooming in, well lets just say that is an exercise in futility.

I was skeptical before doing it and now I really have no idea what that was supposed to accomplish.  We got zero sleep, but not because of the kid or the monitor.  The whole freaking room is loud.  It’s like every item in there has a volume knob and they are all set to “stun”.  The paper towel dispenser sounds like a assembly line robotic arm, the flushing toilet sounds like a jet engine.  You couldn’t even turn over in bed because the mattress made the sound of 1000 rusty gates opening all at once very slowly.  Then we get Ma and Pa Kettle next door, also rooming in, and they decide that 2am was a good time for the airing of grievances.  As loud as it got in the hall I thought for sure they would quickly move on to the feats of strength.  So again not really sure what the sleep deprivation therapy was supposed to accomplish but I think we missed the mark a wee tad.

I have tried, over the course of a few postings, to convey the bonds and relationships that we have been building with some of the staff in the NICU.  It was a tearful goodbye as you might imagine.  We have been seeing these people every day, sometimes twice a day, for the past four months.  You don’t just walk away from that without shedding a few tears.

A lot of the staff, nurse, docs, admin, came by and said some very glowing things about Anne Marie and some nice stuff about us too.  Well it was mostly about Tracy, but I’m married to her so I get lumped in by default.  It will be very weird not to drive to the hospital every day.  Here’s hoping a lot of them can make it to AM’s first birthday.

Once the van was loaded and the tears had dried, almost, it was time to head home.  We were on our own for the first time.  Again very surreal driving away.  Might take us a few days to get our legs back underneath us.  But as we pulled in Frank came running out to meet his sister.  As usual he rose to the occasion.  “She’s so cute.” “That’s Anne Marie!” came out of his mouth the first time he saw her face to face.  This kid, he is going to be a problem down the road.  I can feel it.  Nobody says the right thing at the right time, all the time, unless they’re plotting something.

Here is Frank getting to see and hold his sister for the first time, keeping her warm in her swing, and offering her a binker, albeit with a little more force than is commonly necessary, but he got the job done, binker-wise.  I have no picture or video of it but he also sang her a song that he made up himself.  It was the requisite amount of cuteness and adorableness, I can assure you.

Actual first contact. We told you she was real Frank.

Got to stay warm – the old man likes it freezing in here.

I said take the binker! I’m the big brother now!

We really weren’t sure what Frank would do. Turns out he wants to hold her, feed her, burp her, which he did, take a nap with her, etc…  Frank even started to offer her his toys.  Not just any toys mind you, but his cars from the movie Cars 2.  And not just any cars from Cars 2, but Francesco Bernoulli, the open wheel Formula One race car. Crap I don’t even get to play with Bacesco, as Frank calls him, and I take Frank to the golf course, to the pool, make him pizza and what not. Here he is, having never seen his sister face to face and he’s already giving her Bacesco!?

I mean, she really hasn’t earned it if we get down to brass tax.  Well yeah she survived death defying odds after being born 3 1/2 months early and all but I’m not sure that warrants getting Bacesco.  She didn’t even appreciate it.  She just crapped her diaper.  Them’s fightin words, or ya know, fightin noises, on the streets of my home town.

But sharing his stuff?  Already?  This dynamic I am not prepared for.  And I’m feeling like I got a little chooched because I barely get to play with Jeff Gorvette when we play cars and she got Bacesco.  Put it this way, if there is a Cars 3 sequel, Gorvette buys the farm in the opening credits or shortly thereafter, that’s how unimportant he is.  If Frank offers her any Thomas Train above the stature of, say, Skarloey, we will throw down.

Regardless of that little game within a game Frank is pretty jazzed to see his sister finally.  He held her for a second time and she started to cry.  “I’m all done with Anne Marie.”  Yeah that didn’t take long. 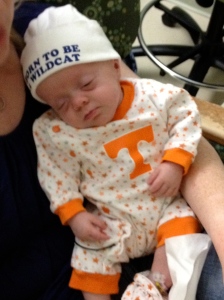 Do what you will with Frank, for he is already poisoned by KY Blue, but I belong to the Power T and Rocky Top!

Yeah great, can we go already?

Finally rid of us.

Seeing the sun and breathing outdoor air for the first time ever.

As most of you know, we did leave someone behind.  Anne Marie and Linda Claire started this together.  No doubt they’ll see each other again.  Hopefully a long time from now.

If your heart desires, donations can be made to:

In Memory of Linda Claire Linardo

39 comments on “Diary of a Stay At Home Dad: The Eagle has landed!”