Around here we love golf.  So it goes without saying that Ryder Cup week is one of our favorites.

Every two years the best 12 players from the United States go head to head with the best 12 players from Europe.  The home country alternates every two years.  It’s at Medinah County Club outside of Chicago this year.  This is an old tournament.  They’ve been playing is since 1927.  It was viewed as a friendly exhibition for the most part, until 1991. That year the Ryder Cup was held at Kiawah Island in South Carolina.  Dubbed War by the Shore it was the first time the matches were televised on a major network.  NBC showed all three days of the tourney and they got a good one.

The tournament just happened to be the weekend after a majority of the troops returned home from Desert Storm, and a wave of US nationalism swept over the tournament setting.  It got a little ugly, which is unseemly for golf but great for TV.  Some of the players wore camouflaged golf hats to honor the troops and some Euros, as well as some on the American team, felt that was over the top.  It’s just golf.  So it got a little contentious.  That Ryder Cup is the reason ESPN now shows every minute from Thursday morning to Sunday night.  The War by the Shore also made the tourney much more than an exhibition.  It went from a friendly, as the Euros would say, to a heated rivalry. Instead of being a nice diversion from the regular season on the PGA tour every two years, it became an honor and privilege to represent your country or continent in the Ryder Cup.

Thanks to some great friends and my brother-in-law Brad, I had the chance to go the Ryder Cup matches in 2008 at Valhalla Country Club in Louisville KY.  I had never been to a pro golf event so I was wide eyed the entire weekend.  It was a huge production and a great time.  The US won that year which only added to the awesome.

This year is better for two reasons.  For one the golf is better all the way around.  Today’s matches were a clinic on putting and course management.  But even better, Frank watched about 3 hours with me today and new kid decided to sleep on me through most of the morning round TV coverage.  Of course they were both sporting the colors and getting into the spirit of the thing. 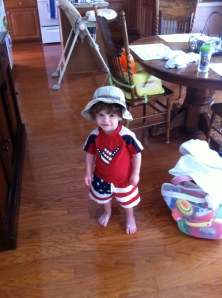 Now AM can’t watch because TV is off limits to her for quite a while.  With her early eye issues and her brian still developing the last thing we need is to have her hard wiring programmed by the Golf Channel.  Or is it?  Hmmm.  No no no I can’t.  But how cool would that be, just plug her brain pan into some Tiger Woods highlight footage and create the ultimate golfer.  Yeah, no I can’t.

I’ll just have to do it the hard way; with hard work on the range.  Frank got the best of both worlds though.  He would watch the golf channel for a few hours while I got the house work done.  Now he’s three and has a pretty good swing and he still likes watching it on TV with me.  That’s pretty much the definition of a win-win in my book. 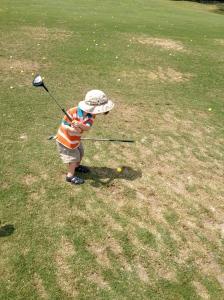 Not bad for a lefty using right handed clubs. 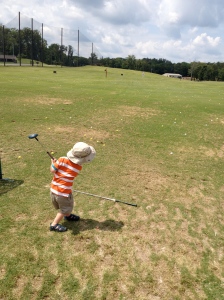 Doin work. Nice finish. That one went about 12 yards in the air, right in the mayor’s office (straight).

Frank really has taken to the game and I can’t help wondering if it was his saturation to the golf channel that moved things along.  My hope is Anne Marie will  catch on to Franks love of the game and we’ll be hitting the links when she turns 3 as well.

Until then she’ll just have to have her back to the TV and wonder what in the world Frank and I are cheering or complaining or acting so nuts about.

Post practice lunch in the “Golf House” as Frank calls it.