So the little one catches on quick.  She was able to roll over from her belly to her back about a month ago.  That’s 8 months actual age, 4 months, 2 weeks adjusted age for those scoring at home.  Not great, but not bad for a micro-preemie.  We’ve been waiting for the other shoe to drop, hoping really.

One of the unintended advantages of the heart monitor was the sleeping on the belly.  She loves to sleep on her belly.  When you have a monitor keeping tack of her breathing and heart rate it’s no problem to let her sleep like that.  That’s generally a no no until the kid learns to roll from back to front, the tougher of the two roll maneuvers.  Once they can roll on to their belly it’s out of your hands.  We were encouraged by the NICU docs and our own pediatrician to let her sleep on her belly if she liked it.  It was great.  She loved it and she slept a lot better that way.  But in October she was coming off the monitor and would either have to sleep on her back or learn to roll over from back to front.

Sleeping on the back was not happening.  It also appeared like the roll over would not happen either.  But then she learned to get that outside leg over and gravity would do the rest.  Victory, she can rollover for front to back and back to front.  She gets to keep sleeping on the belly and we get to keep sleeping through the night.  Hard to imagine but this kid sleeps as much as Frank does at night.  She routinely goes from 8pm to 10 or 11am with out a lot of fuss.

We were relieved to see she could roll onto her belly.  Until I came into the living room, looked down at the blanket I had left her on, and she was gone.

She could roll over, but she wasn’t making a habit of it, and she was just barely getting over from her back to belly.  So she was still fairly immobile.  Which was nice as long as she was happy laying there with a few toys to chew on.  I could run upstairs to get laundry going, clean the kitchen, dash off a few paragraphs of this, monitor my media empire, you know everyday stay at home dad stuff.

I think the day she disappeared I was polishing a post I was about to put up on our political/social/cultural blog, Unfiltered & Unfettered.  It got awful quiet in the living room.  Now I know from already having a kid that little before, and even now as a 3yr old, quiet means bad, danger, trouble, mine or theirs.  It’s like the antelopes on the Serengeti. They know when the lion is about to pounce.  The feel it right before it happens, it gets eerily quiet and still.  The gomer who’s not paying attention to the quiet? well, he’s an easy kill for the lion.  Only way it could get easier for the lion is if the antelope spread honey mustard on himself.  That’s what it’s like in a house with kids.  Not the honey mustard part, the quiet, the quiet is a bad sign.

So I feel the quiet and decide to take a look see.  Except there is nothing to look at.  She’s gone.  Not there.  Vanished.  The blanket just stares back at me as if to shrug, “I dunno.” Where the hell could a 5 month adjusted age micro premie who can’t walk, has no contacts outside of the house that I’m aware of, no access to resources, and no ability to speak, go in five minutes?  More importantly, how am I going to explain this.  “Well Tracy, Anne Marie left.  Yeah she left. No she didn’t leave a note or forwarding address.”

Then I see the Christmas tree moving.  I know it’s not the cat.  Frank and I finally buried Pumpkin’s ashes a week ago after two plus years of sitting in the china cabinet, which was a nicer place than being two feet under the dirt in the back yard.  I’m not sayin. I’m just sayin.

Anyway back to finding the kid.  Look down, nothing.  Tree still moving and then a giggle. Get down on the carpet and see this: 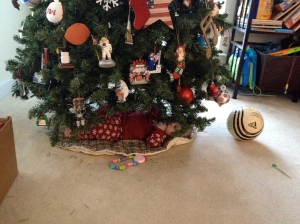 It’s not the cat

Yeah I grabbed my phone and took a picture.  She looked OK to me.  Wasn’t like she was getting eaten by a camel or anything.

She rolled clear across the room.  That’s no small feat.  She had just rolled over from her back to her belly a few days ago, now she went about 15 feet.  That must have been at least six or seven rolls.  Never can tell what will motivate a kid.  We had just put the tree up.  Must have grabber her interest.

Here is a shot of Pumpkin. 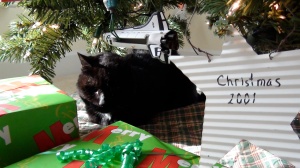 Must be something about that spot.  He loved sitting there too.  Although he just walked there.  Rolling was not his style.