Wow, hard to believe another year has passed.  One minute it was March and the next – it’s New Year’s Eve.  There was a summer in there some where.  Might have even been some fall too, hard to tell.  A lot has happened this year.  We, celebrated, we grieved, we cried, we learned, and of course we blogged.

And since blogging is what we’re here to do, lets get to the posts with the most, the verbal stylings that y’all liked better than the rest.  As always they are in order of popularity based on views each post got.

It was a year of loss.

Christian Clopp: A Profile and Linda Claire    First a little boy named Christian Clopp proved it really is the size of the heart that matters and then was called home. Then our little Linda Claire gave us five short hours before she was called home.  I’ve spent more time thinking about those five hours than I’d hope too.  These were the only two posts that hit the four digit mark as far as views.  Heart warming really.  A lot of people weighed in to offer prayers, condolences, and well wishes.  I can’t speak for Christian’s father Mark, but trust me, it helped me a lot.

Four weeks and famous Linda Claire was a twin.  Her sister Anne Marie soldiered on in the Neonatal Intensive Care Unit(NICU) at the University of Tennessee Medical Center. When she was four weeks old and barely 2lbs we were approached about appearing in a video that would be used to fund raise for the NICU.  We did it and Anne Marie was featured as well.  The fund raiser made 1 million american dollars.  Not a bad nights work. Here’s the little diva/star in all her 2lb glory. 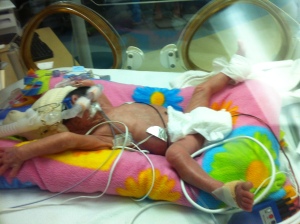 Hey, where’s that breast milk I ordered! And turn up the heat, it’s freezing in here!

The Eagle has Landed     Then after 4+ months they let us take her home.  They expected us to care for her.  Who’s idea was that?  We were apprehensive to say the least.  Tracy went in the hospital in early February.  We took Anne Marie home in late July.  We had been at that hospital in some capacity for 6 months. Being on our own with her was exciting and freaking terrifying at the same time. Plus we made some great friends at the NICU and now we wouldn’t be seeing them very much, after spending days and nights at a time with them.  Ah well, Frank didn’t care.  He was happy to finally meet his sister.

Actual first contact. We told you she was real Frank.

Then more trauma -Mine

Teat of Terror, I know that’s not mud, & They can’t do math were all examples of how many parenting lessons failed to translate from Frank to Anne Marie.  I mean the girl terrorized me for the first few months after she came home.  I’ll spare you the pictures, they ain’t pretty.  Actually those three events all occurred in the middle of the night so I don’t even think there are pictures.  I’m currently in counseling over it all, but they were three of the more popular posts of 2012.  Glad I could provide y’all some entertainment. Jerks.

I teamed up with my old broadcast partner from the Air Force to start a cultural/social/political blog called Unfiltered & Unfettered: The World Explained by Us .  It was time to move the political stuff off of Frank’s Place.  The last political posts to appear at Frank’s Place were about the debates during the republican primary.  I did a few posts about all the rules governing primaries, caucuses, and how delegates are sent to the conventions.  It was basically an Electoral College 101 primer.  A post called Unbound Delegates Explained made it into the top ten posts of the year at Frank’s Place.  Turns out, since almost no one understands our ridiculously rule heavy primary system, the phrase “unbound delegates” became the number 1 search term on the Google.  That made the Frank’s Place post 2nd on Google search, and during the Maine primary we were actually first for a week.  Crazy.

A good cause, always a good cause & Look what y’all did round out the top ten at Franks Place.  While we were in our little bubble of going to the hospital every day for four months, sometimes twice a day, life apparently moved on every where else for most. In that moving on, my little sister heard words no one wants to hear.  ”You have breast cancer.”  She has beaten it so far.  Radiation treatments are done and she on to the meds. Outlook is very good.  We live 660 miles from the rest of my family in Jersey so not a whole lot we could do but ask for help, and walk.  Team Kathy was formed in connection with my wife’s company to walk in the Komen Race for the Cure in Knoxville.  Y’all responded and came up with this great effort.

It’s cold. It’s raining. It’s a good cause and a good lookin squad.

Goal met. And then some. Thanks y’all.

So it was a rough year and a great year and everything in between. Documenting it here at Frank’s Place has been fun and cathartic at times. Writing about grief that seemed unbearable somehow made it less so.  Having all y’all follow along makes it even better.  76 different countries have read about Anne Marie crapping on me in the middle of the night or latching on to my man cans thinking they were heavy laden with milk.  They got to read about Frank growing into a hilarious little 3 year old. (God what must that 1 poor bastard in Paraguay be thinking when he reads this?)

More important I get to look back at a year that has been a blur, slowly read, and remember.

That alone makes it all worth it.

Thanks for reading and commenting.