For whatever reason the picture of the bear by the grave stone of our Linda Claire has generated some interest.  To recap, my nephew Sean put the bear there on the day of the funeral.  Tracy and I took Anne Marie to the cemetery this past week on her birthday and the one year anniversary and were surprised to see the bear still kneeling there.  He’s weathered man. He’s been through some serious storms, snow, all kinds of stuff.  But there he kneels.

I didn’t know until today that one of my sisters, Susan, took a picture of the grave on the day of the funeral.

Be advised I’m not implying any spiritual symbolism or that the bear is somehow watching over Linda Claire.  We’re secure in our faith and we know where Linda Claire is.

I just think it’s an interesting circumstance that the little bugger is still there and upright. Several laws of physics have been violated and proven at the same time.  Not to mention the law of the cemetery, which is roughly: if you put something nice down by a grave stone, rest assured someone will take it.  As you may note in the top left of the first picture someone took the flower pot from that other grave.  That may be the most amazing thing of all, that no one grabbed him up after an entire year.

So anyway here are the pictures for your comparison and wonder. 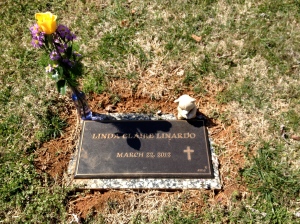 March 2013 – still standing. Or in this case kneeling.

That’s it.  No deep insights, no philosophical conundrums, no spritual underpinnings.

And he’s still there.