Finally, it’s done.  It was a long hard journey, but we have come to the end of the line.

The deck is done.  Looks good too.  If I do say so myself.  Although I did not do it all myself.  I had a great squad helping the entire time. 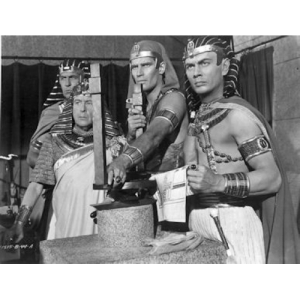 Like Bacca from the movie The Ten Commandments, my buddy Tom was the master builder.  He and his son Kennedy, or Bubba as they call him, came over one saturday morning for a little consult about how to set the footings for the new posts and before I knew it they had torn the old deck down.

I liken it to Cortez when he arrived on the shores of Veracruz in the new world. Cortez burned all his ships to keep the men motivated and eliminated any thoughts of retreat.  Was a good idea.

We also managed to get the posts set and concrete poured that day.  We were off and running.  Good thing too.  I would not have taken that first step on that Saturday. Heck, we might still be debating the post positions if it were left up to me.  I certainly would not have made that much progress on my own.

Rounding out the building team was my buddy John.  He’s a minster and my pseudo golf instructor.  When this started I immediately thought of him.  Tom and I think alike for the most part.  John has a unique view of things. His vision proved itself invaluable over the course of time by way of saving effort, time and money.  He’s not all brains either.  Dude can wield a shovel too.  Setting the footing for the stairs required some serious digging and some serious muscle.  Digging in East Tennessee means clay, dense red clay.  It ain’t fun.  No way that gets done without John, the digging minister with the good vision. 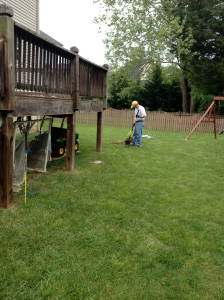 Of course his vision failed him one fateful afternoon when he fell off the deck.

As we were laying the decking down the second course was hanging over the edge by about three feet.  We had laid about 5 or 6 planks and went to carry more materials from the driveway to the backyard.  For whatever reason we were a little distracted while we were getting repositioned to start laying decking.  Without thinking John walked out onto the three feet of decking that was hanging over the edge and supported by nothing.  He made one attempt to step back as the composite planks started to sag, looked back at me… and was gone.  He all but disappeared as the boards snapped, except for his feet.  They came straight up in the air and then sank below the level of the deck, some 5 1/2 feet off the ground.

It was like the mast of a sinking ship, showing itself one last time in the swells of the ocean before quietly settling to the briny deep.

I’ve really got a sea-fairing type vibe working this morning, which is odd because boats scare the bejeezus out of me.

Anyway, aside from several deep saw blade cuts on my hands that probably should have been stitched up, John’s deck dive was the only mishap.

As important as the build team was, none of it happens without the support group.

I have a 4yr old, and a 1yr old, and they need tending.  A lot.  Tom got us started on the framing of the deck and John helped several days a week with the new construction, and I worked several days on my own.  Without Grammy (Tracy’s Mom) and Aunt Sally and Uncle Butch watching the kids, sometimes 8 hours a day, I might still be out there hammering away.   Anne Marie might have made it to 1st grade before I would have been able to finish, without all the babysitting. 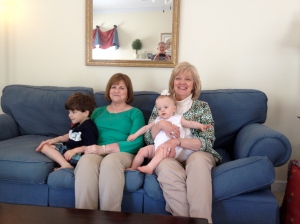 Baby sitting squad, Aunt Sally and Grammy. Butch is in the mirror.

Of course my neighbor Mike, who started all this by suggesting I could do it on my own, was a big part of the support squad as well.  He was  like my daily debriefer.  The dude is in the construction game and travels a lot so I never wanted to get him physically involved, but I picked his brain every chance I could.  He’s like an encyclopedia with this stuff.  The days I worked on my own went much easier because of the guidance he gave, but it was his one suggestion that saved about a days worth of work and a ton of sweat equity.

It’s a little thing that fits in the palm of your hand and powered by a compressor, which Mike let me borrow.  The palm hammer costs about $40 and is worth every penny.  I had decided that we would use the original frame, but when I was able to pull the posts for the stairs out of the ground with my bare hands and Bubba basically tore the rest of the deck  down with his bare hands, we realized we would need to adjust some things.  Mainly that meant rehanging all the of the deck joists, the boards that the decking attach to.  That would mean a lot of hammering.  With the palm hammer I was able to rehang the old joists and the new joists, 25 in all, in half a day.

John had been telling me from the start we would need to find a better way than swinging a hammer, claiming we would not be able to swing a golf club for the rest of the summer if we went the manual route.  That’s all I needed to hear.  In stepped Mike with the palm hammer idea.  My golf clubs thank you Mike.

So it was a team effort, as these things usually are.  Even the gang at Home Depot stepped up. When the company supplying me with the composite decking, through HD, started to give me the run around, Shelley and Laura from HD’s service department stepped in and set things right quick, fast, and in a hurry.

In the end it was a trial, a learning experience that allowed us to double the size of the deck using composite materials and still save a ton of money.  Here’s a few shots in-progress and some of the finished work.

Thanks again to everyone who shed blood, sweat, and tears.

Look out for that edge John!

The stairs caused me to go back to school.  My first and last attempt at building them myself from start to finish. 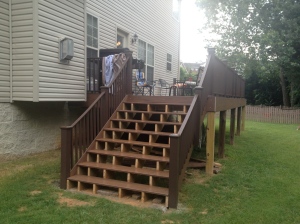 Not a bad first try with the stairs.

Wrapping it with composite walnut looked a lot better than I thought it would. 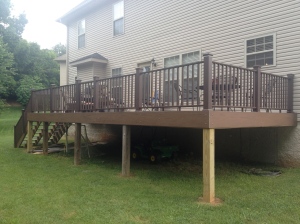 Yeah the trim was a good call.

Even the freaking lights worked!

Not a great shot. Looks better in person.

Come over for a burger!

Alright, that’s done.  Back to the laundry.

8 comments on “Diary of a SAHD: It is finished.”

Leave a Reply to Ellie at Emerald Pie Cancel reply