Hard to put your finger on what makes a great neighborhood.  When Mrs Frank’s Place and I started looking for a house we found a lot of great places.  Nothing jumped out at us for what ever reason.  When we wandered into a new development we kinda had a feeling this might be the place, but the builder and his wife were a couple of jag offs from Pittsburgh and immediately rubbed me the wrong way.  But we walked around the hood anyway.  Tracy wanted to be in a cul-de-sac so we went to see the only property still up for sale that fit the bill.  It was still just a wooded lot, yet to be cleared.  Six of the nine houses on the street were already occupied and five of those prospective neighbors, came out to greet us as we surveyed the lot.  The look on Tracy’s face told me I would have to put up with Mr & Mrs Jag Off for the next 6-9 months as they built our house.

We bought the lot and the house started to go up.  We were in a crappy apartment waiting for the house to be finished.  So crappy in fact that when we weren’t at work we either hightailed it to Lexington to stay the weekend with Tracy’s mom or we went to our new hood for a morale tour and check progress.  Without fail every time we went to see the house the neighbors came out to talk.  Yeah, this was the place.

That was 2004.  Fast forward to 2013 and we are the only OG (read: original gang) on our street. With the new addition of a great couple from San Francisco last week, we are officially the last of the Mohicans on Montford Lane.  Things had changed.  The ice cream socials, 4th of July parades, etc.. all died out.  We were missing the community feel that drew us in.

As it turns out, a good hood is only as good as its members.  Someone was going to have to step up and get things started.  Since we’re way to damn lazy for that, this little homage is to give thanks for people like Whitney, Ellie, Amber and Bo.

Whitney, our next door neighbor, (her husband Mike basically dared me to rebuild my deck by myself), wasn’t in the hood a month or two and said why don’t we have a Facebook Page for the hood?  I gave my usual “I don’t want to get involved” quizzical stare in reply.  So she made a Facebook page for ours and the neighboring hood.  Notices for lost pets, alerts of punks breaking into houses, including one capture, and event planning are just a few of the 101 uses of that page. So simple it’s genius.  Don’t you just hate young people. 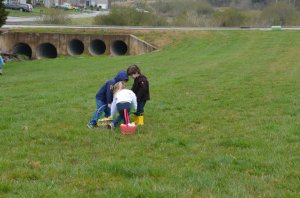 The great Easter Egg Summit of 2013

Ellie and her husband Darren stepped up with the idea for an Easter Egg hunt.  I believe our neighbor Amber was involved as well. Guarantee you I’m leaving someone out of the picture as far as credit goes, so my apologies, but it was on Ellie and Darren’s massive lawn, so they win.  The Easter Egg hunts have been great. We met people from other cul-de-sacs, which can seem like foreign countries at times, and we’ve matched kids with parents. Because, lets face it, once you have kids that becomes your ID. I don’t need to remember adult names if I can remember the kid’s name.  For ex, “Oh I know you, you’re Frank’s dad.” Works out nicely.  The other nice thing about the hunts has been the freedom to eat my body weight in doughnuts.  That’s freaking awesome all by itself.

We felt like the hood may be starting to gel, as good championship teams do. Then up steps Bo. 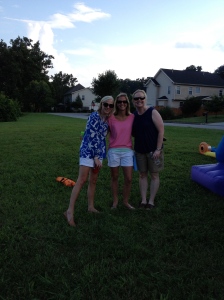 Bo says, “Lets have a shrimp boil.”  I’m not from here and I can’t stand seafood so the idea and the menu were lost on me.  The concept however, was not.  It turned out to be a great block party. Live music, nice bounce house, and a lot of people.  Met a lot of people.  Kids had a blast.  One rather brave, very young lad went up to the mic and did a solo cover of some hick band talking about cold beer and friday nights or something.  I’m from Jersey, if it’s not Bruce, Bon Jovi, or Sinatra I have no clue.  But the kid was good.  Braver then me, no doubt.

There was some unintentional entertainment in the form of a walking door to door salesmen. Well, he was a kid really. Andy, a sophomore at the University of Florida, was working an internship with a company that sells kids educational materials door to door.  He had been on foot, working our neighborhood since the middle of the week. Going from 7:30am to 9:30pm, he was a big hit. And by big hit I mean the scourge of the hood. Knocking on doors 9 at night in a neighborhood with a lot of little kids is not the way to win friends and influence people.  His last day working our side of town was the night of our shrimp boil.  No one was home.  He found us all in a large lot on one side of the hood.

Ain’t a party without my daughter in the middle of things.

Andy had made a sale and was waiting for the dude to pay up.  So Andy stood there waiting for the guy to come for some shrimp.  After some message sending stares from the tougher moms in our hood, just to let the kid know he was an intruder, someone gave him a plate of food.  Somehow I ended up talking to him for about an hour or two.  The gang thought I was chewing him out.  My reputation in the hood is either perfect or in desperate need of repair.

Turns out Andy was a good kid just banking college credits in this 12 week program.  He hung out the rest of the night waiting for his boss to pick him up.

Then the party spilled into the cul-de-sac.  Libations were in great supply and a bunch of us squatted in the road, trading stories and getting to know each other.  The hour became late and silhouettes could be seen in 2nd story widows up and down the street.  Time to relocate.  We were now a gang in search of a cul-de-sac in which to squat; canvas folding chairs in one hand, loaded coolers dragging in the other.  We were a mob not to be trifled with.  Ultimately we landed right in front of my house.

I called it quits around 1:30 in the am.  A handful of real veterans (read drunk old guys) stayed out there much later.  Some great stories were bandied about in the wee Sunday morning hours out in that street.  Of course the first rule of cul-de-sac club is don’t talk about what was talked about in cul-de-sac club.

So here’s to you Whitney, Ellie, Amber, and Bo.  You’ve helped make our handful of streets a neighborhood again.