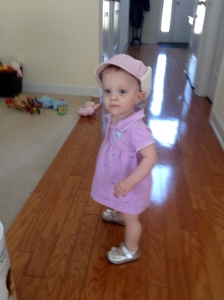 Purple? Don’t mind if I do.

WARNING: The following is a mix between quasi update and gratuitous daddy bragging on my daughter.  If you’re sickened by parents gushing on their kids, this post ain’t for you.  The next blog over is doing something on pro-football cheerleaders, knock yourself out.

On to the gushing.

The prevailing theory on micro-preemies is that they can catch up to their “normal” peers by two or three years of age.  To do that preemies will likely have various therapies after discharge from the Neonatal Intensive Care Unit.  For Anne Marie that amounted to a speech therapist and an occupational therapist once a week.  Both are top notch people.

Because of them, AM is a good bit ahead of schedule.  To that end we have bid goodbye to Miss Kelly, the occupational therapist.  AM is 17 months old actual and 12.5 months old adjusted.  She’s doing some amazing things.  The doc was so impressed with AM’s abilities she felt there was no reason to continue.  Kelly had a lot if not all to do with that and we at Frank’s Place thank her for her service.

It was pretty obvious from the beginning she would not really face any serious physical issues. My fear, the one that kept me up at night, was her cognitive, or mental ability.  There is no guessing or approximating with that.  You’ll just know when you know.  My fears have been unfounded.

I got your kiddie gate right here old man.

This picture is all the proof necessary.

If it’s hard to make out, she is building a ladder to climb over the gate guarding the stairs.  Not quite the Great Escape, but still damn impressive.  That is a full diaper box I mistakenly left in the kitchen.  She pushed it to stairs with the express purpose of jumping the gate. Therapy? Yeah don’t think so.  I’m not sure Frank can’t even do that now and he’s four.   Well he could physically do it, but he wouldn’t bother thinking about it.  Maybe he needs therapy.  I know I do.

The girl has made her presence felt in the hood too.

When she could crawl she would go to the door and look out the side window at the kids doing kid things in the cul-de-sac.  She wanted out bad.  So now that she’s older she can get out there, germs be damned.  And she’s announcing herself with some authority.

Right now she’s the only girl out there amongst five boys.  Until her neighbor Caroline gets to walking Anne Marie is dealing with them all on her own. That’s a tall order.

But I think she’s doing OK. 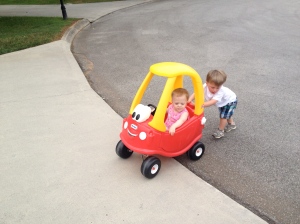 Once around the park James, you know how I love the park.

That’s not really James in the picture.  That’s our next door neighbor Bennett.  He’s the good hearted one of the hood.  When Frank almost killed him by pushing Bennett’s car into the curb at high speed, Bennett jumped out of the wreckage, gave his car a kick and a few choice baby words and turned to Frank.  Looked like some kid on kid crime was about to go down. But Bennett gave Frank a hug.  He’s a good kid. I was yelling at him to pop Frank in the mouth or at least drop him with a kidney punch once he had Frank in a hug.  But he didn’t, just hugged Frank and said it was OK.  Bennett my friend, we have to work on your road rage.

While all this was going on, Anne Marie was sampling just about every toy in the street.

Not sure these boys know what they’re in for.

10 comments on “Diary of a SAHD: Coming into her own – and then some.”