So not too long ago I was lamenting Frank’s transition from backyard sports and games with me to the big boy world of organized sports. In this case specifically, AYSO soccer. Frank calls it “Soccer Ball”. My old Air Force buddy Tony calls it un-American. Both may be right.

I had to literally pull Frank from the car on that first Saturday morning but now, as has been documented, he loves Soccer Ball. He has yet to kick the ball in an actual live game even though he plays 3 of the 4 quarters every game, but he loves it.

Quick side note here: My swarthy complexion and Frank’s long hair may be giving the “coach” a false sense of Frank’s abilities when it comes to Futbol, as my ancestors call it. I mean my father is the first one of the family born in America, his mother having stepped off the boat from Italy to the streets of Philadelphia. But that’s where the connection to the fine game of European Futbol ends. In truth it never really existed in the first place. 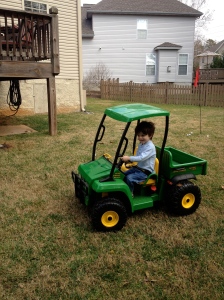 Trying to flee as I rain down all manner of golf ball on him.

Driving Range is a game Frank and I came up with that allows him to play in the back yard and allows me to do something other than sit in a chair and watch him play in the back yard. Frank drives his motorized John Deer tractor around the back yard, pictured left. I stand at the west end of the yard and hit golf balls at him trying to get one to land in the tractor bed. If I get one in the bed, Frank has to reach back, while still driving forward, get the ball and throw it out before I can hit another one in the tractor bed. It’s almost as a awesome as the game of golf itself.

No doubt you can now see why I have missed playing Driving Range. And everyone take a breath, the golf balls are plastic.

Well I’m here to tell the game has been reborn. Another funny/not so funny side note here. When that thought dawned on me today, it reminded me of my father meeting someone who professed to be a born again Christian. When my father would hear of someone being reborn, as it pertains to their faith, he would shout “Hallelujah I’m a Christian” laughing in that mocking tone only an Italian-Catholic, who still speaks Latin, can do. I have experienced this first hand. It’s still funny.

No matter because through a combination of a small twist of fate and Frank’s new found love of Soccer Ball, we have reconfigured the game formally known as Driving Range. It has been reborn.

Our next-door neighbor got a sweet deal on a motorized John Deer tractor. Little Bennet has been buzzing the cul-de-sac in his new ride. This prompted Frank to want to drive his again. It had been growing moss under the deck so I had to do a little refurbishing. Now all Frank wants to do is drive the thing around in the street like his buddy Bennett. So I was left sitting in the drive way watching them go round and round, for freaking hours it seemed. Can’t hit golf balls off the driveway, or into the street for that matter.

But I can kick a soccer ball.

So now Frank drives around and I try to kick the ball into the truck bed. This is exponentially easier than hitting a golf ball in there plus I’m getting much more exercise, so it’s a win/win. Now unbeknownst to Frank, I’m actually trying to kick the ball into the tractor cab and hit him. You know for the added degree of difficulty. Got him four times today. The last one hit him right in the snot locker. That’s his nose for all you Johnny Rebs out there.

Man, he laughed so hard after the ball hit him in the face I thought he was gonna toot for hours.

Turns out it’s a great game. We still need a name, though. Help us out in the comment section.

So Driving Range is reborn and it’s better than ever and I’ve only got one thing to say to that: Hallelujah I’m a Christian!