They say the first step to recovery is admitting you have a problem.

My problem is, unlike Frank, I can’t take my eyes off Anne Marie for a second. So when my sister Carol and I started messaging back and forth on Face Book “last morning” as Frank says, I took my eye off the ball. Turned out to be a wrecking ball.

So I’m gonna just get this out of the way right now.  Carol, my loving sister of 46 years, this was all your fault. There I said it.

Whew, that was tougher than I thought. Nothing at all like Celebrity Rehab.

OK on to recovery.

I live in the great city of Knoxville Tennessee, some 660 miles from the town of Mays Landing, just outside of Atlantic City, where me and my 7 brothers and sisters grew up. Only me and the Warden, my little sister Kathy, were born in that house. But we all grew up there. I’m the only one to leave. The rest stayed either in Mays Landing or the general area. Consequently, I don’t see them often; once a year, twice if I’m lucky. So when I get the chance to “talk” to one of my sibs, I think that’s how the hipsters say it, I try not to pass it up.

This is where the saying, no good intention goes unpunished comes from.

Underdeveloped? Yeah, I don’t think so.

In the 6 minutes we were Face Booking, (that’s a whole other discussion for another time), my not caught up to her peers yet, micro-premie of a daughter managed to:

-get the bag of fish from the pantry

-pull out a chair

-climb up while holding the bag

-and spread the wealth up, down, and all around.

My wife also refers to Anne Marie as The Hurricane.

Tropical Storm AM forms in my office.

At this point I’m not really worried. That’s not a big deal. I’m from South Jersey. I’ve lived through hurricanes, you’d think I would know better. They always start out small.

DVD’s and VHS tapes are the trailer parks of hurricane Anne Marie. Always the first to get it, always the most devestation by degree.

First the DVD’s, then the old VHS tapes, without much protection feel the initial brunt of what’s now a Cat 1 hurricane, officially named Anne Marie. 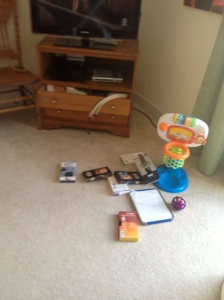 Picking up steam over the warm water by the bonus room.

Eye of the storm. 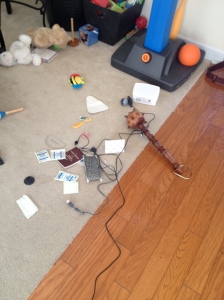 Where is FEMA when you need them?

The back end of a hurricane is always the worst. The trailing edge can have winds double that of the leading edge of the storm. My pod casting equipment and some assorted survival items can attest.

I may be a little late for the next podcast Tony. Waiting for my relief supplies and federal money to roll in.

Then when it looked like the worst was over, the addicting sound indicating you have a new message on FaceBook signaled like a beacon through the chaos.

It was my sister Carol, 4th in the batting order, 2nd sister, messaging me to ask if I received this picture in my e-mail.

In fact I had received it. We briefly discussed the level of my cuteness and Frank’s resemblance to me, or the other way around. Details are a bit fuzzy. Turns out being cute in 1970 doesn’t mean squat in 2013 when you have a 19 month old terrorizing the house, while the 4 year old sits idly by.

Finally, Anne Marie is upgraded to Cat 5 status and makes landfall in the living-room.

It’s not the same as a tornado or even a sharknado, which announce their presence with a freight train like sound.

No, this hurricane was silent but deadly, or SBD, a category up to this point reserved for gas attacks. Welcome to the new age.

The next shot may be hard to take. It’s not for the faint of heart. Be warned. 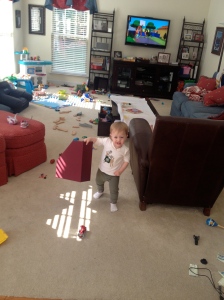 She eats lightning and craps thunder

She made short work of the living room. Debris from my office was found as far away as under the TV, so devastating was her power.

The picture left is testament to her force. She’s tossing a magazine holder from my office to and fro like a rag doll, some 30 feet from it’s original resting place. The magazines inside no longer there. Only God knows their fate.

Underdeveloped? Yeah, I don’t think so.

Then of course the final blow to the kitchen and a bag of rainbow colored fish crackers. Despite the warnings and all the obvious destruction, those little fish refused to evacuate the pantry, determined to stand their ground.