Well, getting down to it now. One small hurdle and as they say, that will be that. It’s been quite the journey. At times it seems like yesterday and then sometimes it feels like a lifetime ago. 21 months ago we were blessed with this:

From my deep sea diving collection – the latest in incubator wear.

She was a question mark because we had no idea what would happen or how to handle, of if we could handle, the whole deal. We didn’t know what to do while in the hospital for almost five months. We were clueless to what issues we would be bringing home, or if we would even get the chance to bring her home.

We were lucky by most standards. We did get to bring her home. We left the NICU with a heart monitor and zero medication. Occupational and speech therapy awaited, but again by most standards for a 1lb 12oz micro-preemie, we got off easy. The OT was in-home and at a local facility once a week, speech was in home once a week as well. Our dance card was full for sure but it was an uncomplicated two step even a rhythmless bastard like me could manage.

As the months went by we shed the heart monitor, then the RSV vaccinations. A few months ago we finished up with the out patient Occupation Therapy, leaving only the in home therapies remaining.

Or should I say therapy.

From a question mark to a 21 month, 24.8 pound exclamation point

Today is a big milestone for us. The speech therapist discharged Anne Marie today. Usually these types of things last until the 2nd birthday, 3 months from now in our case. But after hearing Anne Marie begin to speak in sentences and refer to her breakfast as eggs and sausaeeeg, (read that with an Italian accent), the speech therapist deemed her ahead of her peers. That’s her actual age peers by the way not her adjusted age peers.

Even looking at the pictures now it’s hard to believe that any of it happened. That’s the lifetime ago part. To see her at 1lb just doesn’t compute with what we see now. Just the other day I scolded her for throwing everything off the kitchen table. I never thought I would get to the point of scolding that little kid with all the tubes up her nose.  This kid we thought might be fragile, have development issues, be lagging behind her peers, yeah not hardly. Go back through the archives and read some of the stuff this kid has pulled, the weird pain threshold she has, it’s bizarre.

We knew Frank would be in for a surprise when Anne Marie came home, turns out we all were surprised.

The big one came when the speech therapist said it was time to discharge her. I was more ready than Tracy, but still it seemed very early for that. Liz, the speech lady said “Yeah it is, but she’s past all the goals of a 21 month old, we’re working on 24-28 month old stuff now and she’s doing that too. 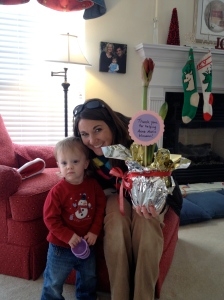 Looks like her mother, but “The Look” she gets from me.

So 21 months later we say goodbye to Liz the speech lady and thank her for her service.

Here is the extremely talented Ms Liz and her star pupil.

Another bonus for me, no frantic cleaning of the house on Tuesday mornings so Liz doesn’t find out we live like animals most of the time. Anyway, she was great. Again we were fortunate to get one of the best in the business to help our little pistol named Anne Marie.

I get that this may seem minor to y’all. In reality it probably is. However, one thing we learned, one thing that was ingrained in us during our time in the NICU; celebrate every step forward. Every ounce of weight gain, every ounce of milk from a bottle instead of the feeding tube, every hour without a heart or breathing failure, celebrate these things.

James said “Whereas ye know not what shall be on the morrow.” The morrow? Bro we didn’t know where we might be by the next minute.

A new minute has arrived. So we celebrate.