Taken in its strictest translation, the bible verse I used for the title doesn’t really mean what I’m about to make it mean. The Book is omniscient no doubt, but I’m gonna go out on a limb and say Isaiah had absolutely no idea what a binker was. Further I don’t think he would have cared.

But I’m a stay at home dad so I care. But only slightly more than Isaiah.

For those of you in the here and now that don’t know what a binker is, prepare for an education. From the Latin securitatem pacis we get security pacifier or passey. Some of you Gauls call it a nuk or binkie. Well from the new Frank’s Place Latin, binkerus incorruptione we get everlasting binker. Or in our case, everlasting shame.

I think I mispronounced binkie once and said binker. Frank seemed to like it so we call it a binker. Note the present tense of that last sentence.

We consider ourselves to be pretty good parents. Frank behaves in public and minds the adults we tell him to mind. He doesn’t pull the wings off of flys. He is a bit of a jeep hog. He likes a good motorized jeep and is not inclined to share. But for the most part we feel like we’ve done well. Except for that damn binker.

Yeah he still had it, at the age of 4 years 4 months, God help us he still had it. We told ourselves he only uses it when he sleeps, but as my friend John says, that’s a lie from the pit of hell. Whenever we don’t feel like fighting with him or we want him to quiet down we let him have it. And he’s hooked. Like a junkie on crack he’s hooked and we are his willing dealers.

A neighbor said “It’s not like he’s gonna take it to college.” Well… At this point he might marry it if we let him.

At least he could have married it. Not now. His little sister took matters into her own hands and led us from the wilderness of our parenting failure. 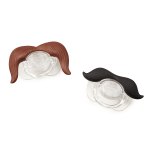 The mustachifier. 9 kinds of awesome.

AM never used a binker once she came home. She used one sporadically in the NICU, but like people who smoke weed for glaucoma, it was purely for medicinal purposes. Once she came home she never wanted it. We had like 300 of them. Frank would go around and collect them up and dump them all in her crib in an effort to get her hooked. No dice. She never took to it.

Then I noticed a lot of hers were missing. I thought Frank might be hoarding them for himself. Preparing for the long cold winter to come. Nope. She was throwing them into the trash. No biggie, she doesn’t use them so no loss.

Then Frank’s personal supply started to dwindle. He had four. Then he had two. When he got down to one he started to panic. I know this because at one o’clock in the am I could hear him making a lot of racket in his room. I go in to find him half stuffed in between the wall and his bed. When I ask what the hell he’s doing he finally looks up, last remaining binker in his mouth like a old time news man chewing a cigar and says, “I’m looking for my binkers.”

You have a binker Frank. “But this is just one, I need the other 3.” Man he’s in deep I thought. Celebrity rehab won’t even be able to deal with this. What’s next rummaging through the garbage like a heroine addict looking for a dirty syringe?

He never found anymore that night. He still hasn’t, and his sole survivor has disappeared.

No sign of it anywhere. But I think I know what happened to it.

So Frank has been a week solid without it. He asks for it from time to time but he has stropped looking for it. I tell him I’m still looking for it, and that’s true. I need to find any strays before he does so I can chuck them too.

Surprisingly he sleeps just fine without it.

Frank has given up all hope at this point and called off the search efforts. He now firmly believes what I believe, Anne Marie threw it in the trash.

One by choice and one by the hand of the devil in a blue dress.

5 comments on “Diary of a SAHD: And a little child shall lead them”