Being a Stay at Home Dad has been one giant learning experience to say the least. There have been a few non-fun type lessons, like adjusting to civilian time. The adage 5 minutes early is 10 minutes late no longer applies. In fact just the opposite seems to be the case, at the doctor’s office, school, the pharmacy, you name it. That adjustment has been tougher than giving up Diet Coke and Italian bread. But it’s a minor deal in the grand scheme.

Most of the lessons have been, in a word, great. Take for example the birthday circuit. Frank is old enough now that he gets invited to a lot of birthdays. Kids from the hood, from school, etc… This is a lesson I’m right in the middle of. With the focus on Anne Marie the past two years, we’ve been late to the circuit.

This is one of those deal you have to experience to appreciate. Like that Calculus II class everyone said sucks, and the professor sucks, and the book sucks, but when you got in there you realized nothing could be further from the truth. Most of my college classes were that way. I had pre-concieved notions that were validated by other’s opinions, only to be completely debunked when I actually experienced the classes myself. Same thing with the birthday circuit.

When Frank got the first few invites my initial thought was, “Aw c’mon man, we’re into this already?” I won’t name names, but there were more than a few parents who fed me some pre-concieved notions that fed into my pre-disdain for kids birthday parties. Like most things, I was wrong again.

I am completely secure in admitting to you the number of things I have been wrong about when it comes to parenting and situations surrounding parenting requires it’s own algorithm to compute.

To put it plainly, the Birthday Circuit is awesome.

The birthday parties come in all shapes and sizes. From bounce houses, (life size, hot air poppers, that use kids instead of popcorn kernels) to activity destinations, (think laser tag and the like) to themed parties, (light-sabers for everyone?!?! Hell Yeah!). Aside from the light powered deadly weapons, the benefits for this SAHD hitting the birthday circuit are almost too numerous to count.

One of the first things that jumped out at me was  the presents are opened later. I love this concept. I can’t and never could stand opening presents in front of other people. I’m like a karate man, my emotion is on the inside. So the person who gives me something is left feeling like I may not have liked it even though I was ecstatic to get it. So I’m a big fan of the open gifts later deal.

The birthdays with bounce houses are like study halls. The kid is in the little bouncy thing, generally safe minus the cracking of his coconut on some other kid’s mellon. While he’s in there I can listen to and/or pick the brains of the parents at the party. It really is a treasure trove of ideas and experiences. Sometimes it can be just a simple, “Oh your kid does that too?” “So while I may be a dope normally, in this case I’m doing this particular thing right.” I don’t usually need reassurance, but I have found it can’t hurt.

Do I even need to go in depth on the themed parties. LIGHT-SABERS!

I just had my first experience with an activity destination. We missed a great opportunity when Grant, a cute kid from our Sac that Frank counts among his four best friends, had a party at Gym-bugs. Our entire house was sick. You may have read about it in the last 300 posts I’ve written. Anyway this joint has ball pits, mini roller coasters, gymnastic equipment, the works. That would have been fun even though most of the stuff would have been too small for me. Sorry Grant, happy birthday anyway bud.

But as the circle of friends grows, so does the circuit.

Another birthday and another activity destination. One of Frank’s preschool classmates had a party at Jump Jam. Trampolines bro, lots and lots of trampolines. A giant floor of trampolines in the middle, giant pits of foam on one side, and a basketball court with a trampoline floor on the other. The party was at 8am on a Friday morning and the temp was 9 degrees in Knoxville. Yeah you read that right, 9 freaking degrees. You got to want it on the birthday circuit.

It was worth every bone chilling degree. 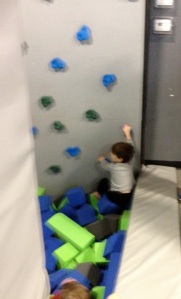 So much for not liking it

I can’t remember when I’ve had so much fun. It got started right away when we signed in. The lady handed me one bracelet. I asked if that was for me or Frank. She said, “Oh are you jumping too?” Am I jumping too?! What kind of question is that? Can’t you see my legs? They may be holding up a pear shaped middle, but honey these legs were made for jumpin.

Frank, well he worried the entire ride over that he wouldn’t like it. When he saw his friends already jumping by the time we got there, he had his shoes off in 2.3 seconds. Of course he was a natural.

Once I got physics working with me I was catching some air. Not a lot of hang time mind you. Even Galileo couldn’t save me in that department. But it was still a blast. Best kid birthday I’ve been to so far and best workout I’ve had in a year. Try jumping, chasing your kid while jumping, and climbing out of foam pits while kids jump on you for a straight 60 minutes. You’ll feel the burn. I was sweating like a pig, a pig I say. 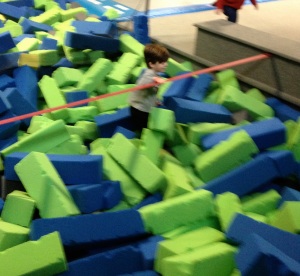 The foam pit was not kind to me

Of course there is always some skinny little putz showing off. Some dude who could fit through a mail slot was jumping from one side of the room to the other. His nasty little pig toes were getting about 25 feet off the ground. He was hitting each tramp (that’s how the kids say it) dead center and flying to the next one. I was watching to see if his friggin head was going to hit the roof beams of this joint. No luck, eh I mean  good for him.

Anyway, this was a great activity birthday and I look forward to the circuit this year.

I think you’d really have something there.

7 comments on “Diary of a SAHD: The Birthday Circuit”