I was dreading this moment. I was hoping we were past it, that somehow we dodged a bullet. At least I was there when it happened to deal with the fall out.

Back in January we had finally got Frank to give up his binker at the ripe old age of four. Yeah four. Although truth be told it was our then 20 month old Anne Marie who did the deed for us. You can read that sad story here: A Little Child Shall Lead Them

She had been on a house cleaning binge at that time, throwing everything she got her hands on into the trash. So when Frank’s binkers and his back up supply all came up missing we naturally assumed Anne Marie had thrown them out. Whenever Frank asked me to look for them I told him the search was on going. That wasn’t a lie.

I was looking for them. He had gone several nights without them and other then ask about them before bed he made no fuss. So I was frantically looking for them so I could find them before Frank did. Once found I would do what we thought AM had already done, chuck em in the trash and declare victory. Our long national nightmare would be over. We would no longer be bad parents.

Well that plan went to hell in a hand-basket.

It’s only been two months since all this went down. Feels a lot longer. It’s been a long winter my friends. But Frank stopped asking about his binker about 5 or 6 weeks ago. I think I heard him giving a short homily and taking up a love offering from all his stuffed animals a few weeks back. Undoubtedly a memorial service for his dear departed binkers.

But the service was premature. Like a bad soap opera the main character returns in the final minute of the Friday show.

My enforcer, my little hit-girl, the one I send out to do the dirty work, brought me one of Frank’s planes that opens in the front. It’s a big Playskool thing. She was trying to get the front open but it was jammed.

Thankfully Frank was at skool, cause when I got it open I found this: 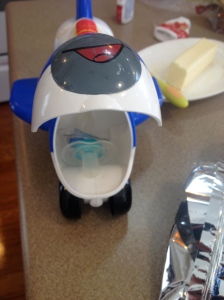 Yeah my heart skipped a beat. Then I realized we had done it. We had found them before Frank. Victory at last! I looked at Anne Marie to explain what this all meant and I see the little snot with a look on her face that says, “He was never gonna find them.”

So that answered one question for me at least. She hid them there and not Frank. He’s never looked for anything as much as he looked for his binkers in the few weeks after they went missing.

So she didn’t toss them she just stashed them. Why? I’m not sure. Maybe she was going to use them for leverage, maybe a ransom she juts forgot about, who knows with that kid.

But no matter, the binkerus incorruptione, or everlasting binker for those deficient in kid latin, is no more.

Since Anne Marie never got hooked on a binker or paci or nook or whatever, we have come to the end of one small phase of child rearing.

2 comments on “Diary of a SAHD: Eureka! There’s Binkers in them there toys!”