I have been trying to be consistent with posting here, but I keep tripping myself up. It looks like I’ve moved into that phase of stay at home parenting where I’ve become my own worst enemy. This whole parenting/house husband thing is getting in the way of the one thing I do well in life, Blogging.

…trying to save even more nickels, actually a lot more, an obscene amount of more, we got rid of the recycle guys and only pay for trash pick up. Now I collect up all the recyclables and hump them across town to the recycle center – less blogging. Thanks a ton Mike and Whitney.  Dang Hippies.  🙂

And for the big enchilada, trying to increase Anne Marie’s vocabulary, I was teaching her breakfast food words. But I was teaching her to say them like me and my brothers and sisters said them as kids. So sausage becomes sauseeeeege, with the eeeeg drawn out.

Well of course that’s the word that stuck with her and consequently became her favorite food, with eggs a close second. 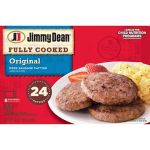 Jimmy wouldn’t hurt us, would he?

So when we get back from dropping Frank off from school she asks for eggs and sausaeeeege. Sometimes she’s asking me for eggs and sauseeeeeg as we slowly walk down the stairs at the school.

That’s cool though. I dig eggs and sausage. Frank and Tracy hate both with a white-hot passion. No biggie, more for me and my Anne Marie.

Turns out the kid can really pack away the sausage. I was buying them a box at a time at The Kroger. Then I experimented with different brands, then finally when she was knocking back four or five at a sitting, I bought in bulk.

Did I mention I’m not a fan of buying in bulk.

So my first attempt at a bulk sausage buy was some brand I had not heard of before. However, before Anne Marie, my sausage intake came in the form of a #9 from McDonald’s. That’s a sausage, egg, and cheese McGriddle for the less informed. All that to say, most of the brand names of sausage at The Kroger were foreign to me anyway, except for maybe Jimmy Dean.

Well Jimmy Dean doesn’t sell in bulk so I ended up with a generic brand or something. No, no, not something. Let me revise that. We definitely ended up with something and it has a name known to most people.

Me and midget #2 ended up with food poisoning last Tuesday.

Not doing so good.

By 10am she was clinging to me like velcro and whiny as all get out. By noon I was aching all over and by 6pm I was burning up. No puke from either of us, but I was so achy and feverish I fell down the stairs. So I had that going for me. By 9pm I was in bed with a fever in the 100s and AM was howling. Tracy had her hands full. I think it took her about three hours to get Anne Marie to bed. I actually have no clue. I was delirious with the fever at that point. I think I may have time travelled.

Since Frank and Tracy hate eggs, and sausage for that matter, they were unaffected. That’s sort of how we figured it out. It was the one thing besides the eggs that only AM and I ate. The eggs were in date but that doesn’t necessarily rule them out. But the sausage was new, as in we’ve never eaten that brand before and the date code was suspect. It was tough to interpret, which is a red flag to begin with, and if I did read it right, we were on the edge as far as expiration goes.

So we blamed the sauseeeeeg. And we have since eaten eggs from that dozen and we were fine.

My fever broke in the night but then I hit phase two the next day; The Exodus. And it didn’t come out the way in went in if you know what I’m saying.

Put it this way, I wasn’t on “solid ground” till Saturday afternoon. Of course I ate 3 of them and whatever AM left on her plate so I was bound to get the brunt of the assault. But all is well now and I’m four pounds lighter for the experience.

I was a little shocked that AM was ready to hit the sauseeeeeg again so quickly. We were back into our routine by Thursday morning. Well she was anyway. I was still “payin the man.”

Needless to say we are religious expiration date checkers and name brand only snobs now.

That’s a very long story to say, Hey I’ve been slacking here but I’ve been sick with some bad sauseeeeeeg. I’m better and things should pick up.

Sometimes getting right to the point isn’t nearly as fun.