So the girl had a birthday.

I won’t bore you with the “we never thought she’d survive to her 1st, let alone her…” Well, by now y’all know the drill.

Here’s a then and now that tells the story better than I could. 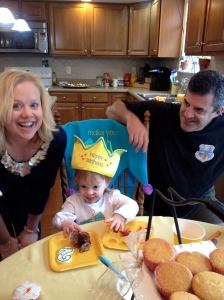 It was a great time. Lots of everything, friends, cupcakes, gifts, decorations, yelling, screaming, running around, etc…

I’ve been blogging for a long time now. Long enough for y’all to know Anne Marie’s story. If you don’t, hit the archive section. Some good reading in there if I do say so myself. And I do.

Anyway, every once in a while the blog pays off in something other than self satisfaction.

A company called Pinklejinx sent me a sample of their birthday stuff and asked me to use it and maybe write a review or post about it.

Free stuff to write a review? Do you even have to ask? 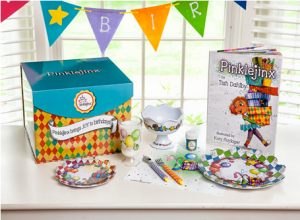 This is just smart.

So this box appears on my door claiming it has everything necessary to chuck a good party, minus the cake. In the picture with Anne Marie you can see the crown, chair cover, and in the bottom right corner the utensils shaped like birthday candles. It also came with a goblet, two plates, a bowl, a nice Happy Birthday sign, a book, and a place mat.

At the risk of being called a company man, peep the picture to the left. It’s from their web site and does a better job showing what comes in one of their packages.

Now those of you who know my wife are probably thinking the same thing I was. Ain’t no way she’s going for this. She’s more of a theme type party thrower. But I figured we would do her theme party for AM on Saturday and use the Pinklejinx stuff for a Sunday night deal with just family.

Tracy’s gettin soft. We went full Pinklejinx on Saturday. Turns out Tracy liked it. Again for those who know how particular she can be when it comes to parties and general birthday type merry making, that is a pretty stout endorsement. As we’re packing the stuff up back into the nice box it came in Tracy looks at me and says “You know what dude, this was a good idea. I’m Pinklejinxed.” If the people at PinkleJinx ever ask me to write a commercial for them, I’m not including that corny line.

But I will say I was impressed as Tracy was, probably more so because it was free. I mean let’s face it Tracy has the taste in this family. But for me it also reduced a lot of stress because we didn’t have to make anything. Box or no box we were going to have a sign and decorations and the whole nine, but this way we just unpacked it and hung it. No crafts, no design ideas, none of that nonsense.

So the PinkleJinx box has become our Birthday Box. Frank will get to pull it out and have it for his birthday in a few months. I am a bit of a sucker for family tradition and this might just be a recurring tradition for birthdays around here.

Free birthday stuff that we can use over and over, yeah color me freaking Pinklejinxed too.

And let’s face a universal truth, Pinklejinx is just fun to say.