See, in order to acclimate the little tykes to their new environs, they go one half day a week for two weeks. That half day is critical to the pick up lane people. That half day is what triggers the feeling, “Oh this doesn’t seem so bad.” Gotcha!

Yeah see, the staggered start half days means there are only about 40 parents coming to grab up their little tykes and tyke-ettes. The week following the final staggered start is when the parent of a first timer will get the full monty. It’s a sight to behold.

As with all endeavors where people who have never been taught to be in charge are in fact in charge, a glut of time is required to complete said endeavor as a multitude of procedures are in play. Many of those procedures are unspoken or unwritten.

By the way, first rule of pick up lane is in the rear view mirror. We are now transgressing.

Anyway, the first unwritten rule I encountered and subsequently broke was leaving the vehicle. Stopped by a police officer and sitting the Car Lobby Pick Up Lane are the two circumstances where it is still legal to pepper spray a motorist if they exit the vehicle. 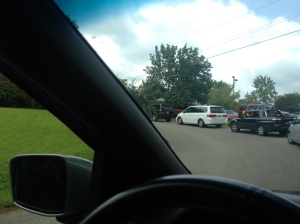 You have no friends in the Car Lobby Pick Up Lane

Case in point, I survive the 45 minute wait from my paltry 58th position in line and roll to a perfect stop in front of the herd of kids waiting for pickup. I pop the hatch on the Starship Frankerprise (our minivan for the uninitiated). A fine young man, I make him to be 5th grade, wearing appropriate accouterments marking him out as a person of considerable authority, approaches the side hatch.

In his charge is one Frank Linardo, 1st Mate of the Starship Frankerprise. The lad escorts Frank to his command chair. I jump out to secure Frank in his seat in case we encounter turbulence on the homeward voyage.

Ok, now how many of you parents just cringed or otherwise yelled “Don’t get out of the car you chooch!” directly at your computer screen and/or mobile device?

It took me 3.8 seconds to secure Frank and get back in the car. In that time a woman, presumably in charge, approached with death laser vision engaged. She peered in my passenger window, glanced around, spun on her heel, withered the young lad in the safety patrol gear with a spleen melting stare, and returned to her position on high. I quick like lowered the window and yelled, “What’s the problem?” I figure I’m in trouble for something, might as well put my head all the way in the lion’s mouth.

She was nonplussed and ignored me. I asked the safety kid why he got the stare down. Like a loyal capo he covered for his Don, saying she was just making sure Frank was buckled in. That story might have held up had it not been for a kindergarten parent wide e-mail sent the next day saying, “Stay in your cars dumb asses!”

I know that was aimed at me. I can read between the e-mail addresses. Hey I may be paranoid but that doesn’t mean they aren’t out to get me.

So yeah don’t get out of the car. I can only imagine the indignant faux rage directed at me from the driver seats of the cars who were delayed that extra four seconds. And yes Smarty McSmartypants I can do the math if every parent jumped out and what delay that would cause. But the question remains, who was going to secure Frank in his seat?

Answer – nobody. Frank secures the top harness across his chest himself and because he doesn’t have the leverage to push the tabs into the buckles he leaves the buckle around his waist loose until I get to a spot up the street where I can stop and jump out.

Makes for an efficient exit from the CLPUL but it seems to be missing something in the safety area. No matter. More important to get in and get out of the Car Lobby Pick Up Lane quickly than have Frank buckled in safely.

My second foray into the CLPUL was not much better. I received word, via forward scouts, the traffic was piling up on the approach to the school. I headed out forthwith, avoided the traffic jam with a deft back road approach and found a small line forming in the Pick Up Lane. I motored to the end of the line and executed a quick like 3 point turn to take my place in line. Whilst performing point #2 of the turn I encountered some hardened earth, taking a heavy hit to the underside of the Frankerprise. All systems seemed to be in order so I continued on to wait the requisite 60 minutes for pick up.

As the time for pick up arrived I could hear a strange noise every time I moved forward. Turns out a five foot piece of trim had broken off and was hanging on by one small screw under the front mud flap. The piece of trim was sticking straight out into the road on a 90 degree angle from the front tire. In other words no one waiting in line behind me bothered to give me a heads up even though they could all see it. So I rolled down the window, shouted some niceties, and kept on rolling. Hey man, I’m not giving up my place in line. I’d have been there for hours if I got out of line to fix the van and you know, no getting out of the vehicle in the Car Lobby Line so… Yeah I drug that five foot hunk of plastic down the street, through the school parking lot and right up to the pick up point in front of the Car Lobby door.

Frank jumped in and a very helpful teacher showed me a spot in the Car Lobby area where I could pull over, dismount the vehicle, and get her road worthy. Car Lobby – 2 Starship Frankerprise – 0

I have since completed three more runs at the Car Lobby Pick Up Line with no incident. In fact I am writing this post as I sit in the Car Lobby Pick Up Lane. I have to say the system does work well unless you have a kindergartner still in a full size car seat. Then it gets dicey as to security of the five point harness at pick up time. Aside from one individual with a Napoleon complex, the Car Lobby gang are usually very nice to us first time idiots and they do a pretty good job with what seems like an insurmountable task.

So if you’re scoring at home: Car Lobby Pick Up Lane – 2   Starship Frankerprise – 3

However, the wait in the Car Lobby Pick Up Lane is one of the most excruciating hours of my day. Completely jacks up everything and the freaking bus beats me home anyway. Riding the bus home from school is looking better and better everyday. I broached the subject with Frank. His response, “Oh no no no I’m a car rider, I go to the car lobby.”

Well buddy now you’re a bus rider and you go to the Bus Lobby and if you have a problem with that, write your congressman and donate to his reelection lobby.

Tuesday ought to be exciting.