Hard to believe we’re already into the third month of school. Growing up in South Jersey starting school before Labor Day and the Jerry Lewis MDS Telethon would have seemed crazy. Now that I live in the south, welcome to the crazy. Both Frank and Anne Marie started school in the month of August. Down here Labor Day is just a three-day weekend for school kids and I don’t think anyone ever heard of Jerry Lewis.

The silver lining, we already have a plethora of subjects to write about. To get started we’ll do a picture review of the past six, yeah six, weeks of school. Picture commentary added by me. Enjoy!

The pre-event event. We could make this stuff up, but it wouldn’t be half as funny or tragic. 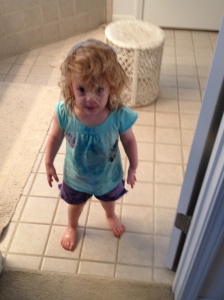 So what you’re seeing here is an entire jar of aquafor spread evenly over the body of a two-year old. How’d she get it you ask? Well that’s simple. She built a less than super structure next to her changing table, climbed up a height of six feet, retrieved aforementioned jar, climbed down and proceeded to anoint her self. All while supposedly taking a nap.

The important part of this picture, it’s one day before her first day at pre-school. Auquafor is basically the kid version of vaseline. Getting it out requires several baths over several days with cornstarch and dawn dish soap. Yeah. 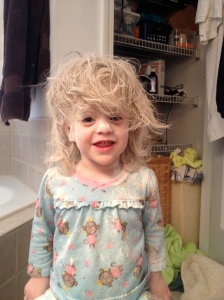 Here is a look at the procedure. Bear in mind while it looks like that first treatment of cornstarch or baking soda gives the appearance of drying out the hair, once you rinse it out you still have a Valdez like grease slick on your kid’s rug.

The following two pictures I offer as proof of… well I don’t know what. But it damn sure seems like it’s proof of something, maybe evolution, maybe just proof that wild beasts like hot baths. I leave it to you to figure out.

For you younger folk, the pic on the right is what we did before the internet. We read magazines, newspapers, and periodicals. Primitive I know, but sometimes they gave us cool pictures.

Anne Marie, hair rinsing procedure #8, August 2014 and the Snow Monkey of Japan, Life Magazine, January 1970. Which is which? I can’t tell. 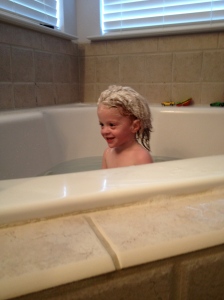 Sure she’s enjoying it. daddy didn’t. The tub drain didn’t either.

Tell me they’re not related.

The Moment of Truth

Greasy hair not withstanding, day one came as scheduled. The happy event recorded for posterity, accompanied by the cliché first day mug shot.

Clearly Mrs Frank’s Place and I differ on the definition of conservative dress, so AM could ease into her first day.

Note the big comb by her foot, now necessary to deal with her “new” hairdo. Nothing else could penetrate the protective shield of grease.

The biggest surprise came at drop off. This kid has been Velcroed to me since we brought her home from the hospital in July of 2012. When we dropped Frank off at the age of two he never looked back. No way we get that lucky twice.

Enamored with her new backpack, she walked right into the class room carrying both the backpack and her lunch pack. But once she saw the play-dough on the table she dropped those things like hot rocks and never looked back. She also forgot I existed. What did I do? Ha! I signed that freaking sign-in sheet and high-tailed it out of there.

Those pre-school people know what they’re doing. That play-dough was no coincidence. It’s science man. So I don’t mess with the formula. I love people who have a plan of attack, are confident in their plan, and get about executing it. AM’s pre-school teachers are exactly that way. I am a more than willing follower of their lead.

And no I was not upset that AM appeared to abandon me for a dime store jar of play-dough. I was ecstatic. I may have a shed a tear or two when I got to the golf course 15 minutes later, but it was more likely a tear of joy for my new-found, albeit short freedom. Plus it was really windy so it’s hard to tell what caused it.

Oh, and how enamored is she with her backpack and lunch pack? Take a look.

The ride to school. Refuses to let go. 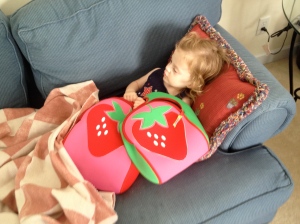 After school. Refuses to let go.

She’s digging school, and I’m digging that she’s digging it. She likes it so much we’ve bumped her up from just two days a week to three. She’s even enjoying the after school program from time to time.

The weird thing is her teachers say she’s one of the most behaved kids. Obviously that can’t be true, but they are standing by their assessment.

I mean this is the kid who stopped up the sink in the upstairs bathroom and flooded the room, the hall way and the garage. This is the kid who opened four different cans of paint that were hidden in the hall linen closet and painted the carpet and herself with a few different shades of blue and red. This is the kid who lay in wait for her brother to fall asleep on the couch before sneaking up behind the arm of the couch, reached up, grabbed his long hair and lifted her feet off the ground, placing all of her body weight on his hair.

Most behaved? Okay, if you say so.

Anyway, here’s a few of her during the school day. Yeah she looks behaved, but these are still shots.

Taken day one by the teacher to let us know she’s fine. 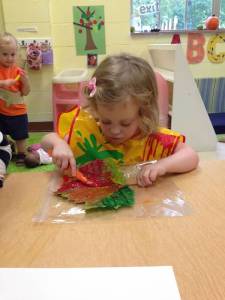 Putting those carpet painting skills to good use. 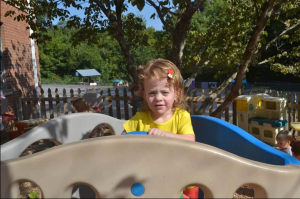 Clearly plotting on the next unsuspecting victim. 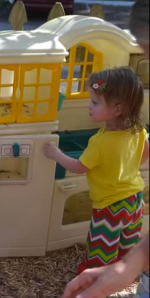 An added benefit of pre-school – unassisted nap taking. On the he days she’s in school getting her to nap is as simple as leaving her be when we get home. She’ll find a place, make a nest, or crawl under a blanket and nod off for a few hours.

It’s as awesome as it looks and sounds.

Sleeping in her own ottoman empire.

Her teachers have been lulled into a false sense of security I think. Pray for them.

Next up! Frank conquers kindergarten one coupon book at a time.