It’s a rare day when parenting and election politics intersect so clearly. My friends we are in rare days. The governor’s race in Texas just waded uterus deep into the discussion over when life begins, when it’s ok to end it, and baby clothes.

Yeah that’s right, baby clothes. I could try and describe it to you but a picture in this case is worth well over a thousand words. 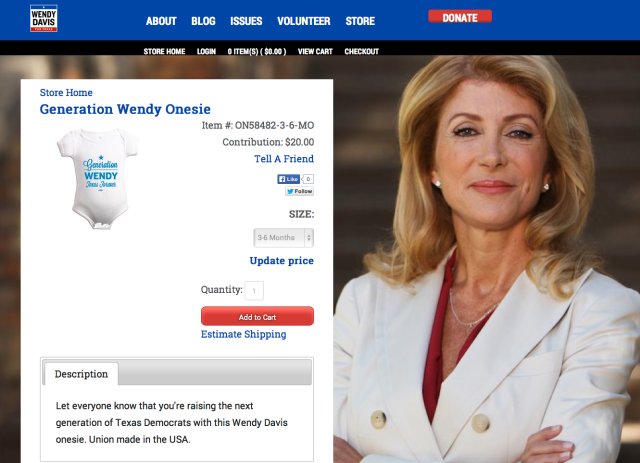 The face of absolute evil ladies and gentleman.

If you’re still a little unsure of what you’re looking at and why it’s important and at the same time evil and moronic, let me help.

^^^^ Smuggy McSmuggerpants there is Texas State Senator Wendy Davis. She is the Democratic nominee for Governor of Texas. Governor Rick Perry is term limited so the seat is open. Thank god she does have a challenger, Republican Greg Abbott, a wheel chair bound paraplegic. He has a sizable lead on Ms Davis.

Wendy became infamous for staging an 11 hour filibuster in the Texas Senate in an attempt to block Texas Senate Bill 5. The bill would, among other things, limit the murdering of unborn babies to less than 20 weeks, and force doctors who perform abortions to actually be doctors and have admitting rights at the closest hospital. That last part was an attempt to stop situations like what happened to innocent babies at the hands of the Philadelphia murderer Kermit Gosnell, who was found guilty of murdering over 20 babies 24 weeks or older by cutting their spinal cords in the neck in his Philadelphia abortion mill. Let that sink in, 24 weeks or older. My daughter was born at 25 weeks, 1lb 12oz, and survived.

Gosnell was killing live babies by any standard. Here’s the link but I caution you, it’s graphic and nightmarish. House of Horrors  So ghoulish was the trial, the assistant prosecutor cried openly when the jury found Gosnell guilty on all counts. Texas Bill 5 sought to prevent horror shows like Gosnell from happening in Texas. Wendy Davis took to the Senate floor in her now famous pink Nikes to block that bill, adamant that the women of Texas have the freedom to abort babies after 20 weeks in the womb. The main thrust of her argument, those fetuses can’t feel pain.

Right so because they might not feel pain, which is a load of crap anyway, the babies should be candidates for murder like any other person unable to feel pain. Uh….. Say Wendy…. your opponent in this here governor’s race, isn’t he unable to feel pain from the neck down? Is that how you are going to erase that 14pt lead he has on you? But lets leave that irony for another day. There’s a bigger irony filling the windshield at the moment.

I mean for starters, what would any of her constituents do with a onesie? Those are for babies that actually are, ya know, allowed to live. How could she expect to raise a generation of Wendy Davis Democrats when she wants the freedom to murder the next generation? Who approved that sale item on her page? Is some intern not paying attention? Has she been hacked? I asked Frank what he thought must have happened: 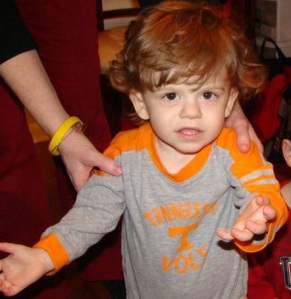 Thanks a ton Frank.

Yeah that’s it, her web site was hacked. Has to be. How else could she explain selling a onesie after she became famous for advocating the murder of unborn babies in the third trimester? Yeah folks, Wendy is ok with killing babies after 24 weeks. She would call it late term abortion. And she wants to sell you this onesie to commemorate the event

Anyone with a .1% brain function knows a baby who makes it to 24 weeks is alive. There is no argument there. Know why? There are neonatale intensive care units across the counrty full of living babies born at 24 weeks or later. In fact those NICUs proabably have several babies born weeks earlier than that; babies who will survive and live normal lives.

How do I know that? I spent 5 months in the NICU at the University of Tennessee and saw it for myself. Oh and one other reason, well maybe two:

“I got your late term abortion right here Wendy!” BOOM!

Thank you Lord that Wendy Davis is not my State Senator!

Anne Marie Linardo 25 weeks, 1 pound 12 ounces. L to R: Flipping off Wendy Davis from her hospital room at what should have been 35 weeks in the womb and starting pre-school, or as she calls it spree school, this year at the ripe old age of two.