So Mrs Frank’s Place headed north Friday afternoon to Lexington for a sorority reunion at the University of Kentucky. That left me and the kids alone for the weekend. Finally a little respite from the constant messes, demands, and all around chaos a injured spouse brings.

Both kids were snotty and Frank was hacking so it was basically shut in time for Saturday and Sunday. My kind of weekend. Since both kids were down and out I decided we’d do all the cleaning on Saturday and run any errands on  Sunday morning and then I could fold clothes the rest of the day. We were on track too until an impromptu cave made from a lot of blankets started forming in the living room.

In the pantheon of messes in that room, it was small potatoes. But it still needed to be cleaned up. And this little Occupy Living Room hovel was jamming my schedule. The mess was getting bigger and the kids were getting lazier. How long before they form a drum circle and demand an equal share of the doritios? Gotta put a stop to this quick, fast, and in a hurry.

Our final errand Sunday was Target. Super Target to be exact, the kind with the grocery store inside. Passing through the snack isle both kids perked up at the sight of doughnuts. Ha! Got ya!

Ok we’ll go home, clean up the living room, and then eat some doughnuts out on the deck, ya?

I want to eat on the deck toooo!

Yes Anne Marie, you get to eat on the deck too.

You need ya a Fuller bro!

Like shootin fish in a barrel. Or whatever other euphemism you can think of for tricking someone into doing things you’d rather not do yourself. I’m happy I can mentally manipulate my kids so easily to my own benefit, but I worry they will grow up weak minded fools. Ah well, they did it to me when they were infants and no doubt they’ll turn the tables back on me soon enough when I’m in old people diapers.

So out on the deck we went. The adult in the group requested lunch before his doughnut. That Frank, always the buzz kill. Of course his copy cat of a sister now wanted lunch first too. So now I’m working to make lunch. Sammiches (as Anne Marie says), and carrot sticks. These kids are weird. We did have music though, and we did finally get to the doughnuts.

Keep in mind these kids don’t do kids music. Frank is a Bon Jovi fan and he cut his teeth on Frank Sinatra. Fly Me to the Moon and Livin On A Prayer are his favorites. AM on the other hand was serenaded in the NICU by Chuck Berry and Ray Charles. She goes into dance mode at the sound of Route 66, Johnny B. Goode, or You Are My Sunshine. If you don’t know who sang which song I can’t know you. Shout out to John Couchoud, Nickleback makes her cry.

Anyway the point being, DJ’ing for these runts ain’t easy, especially when they are all hopped up on carrot sticks and doughnuts. But man, hit the right tune and they get their dance on. Two unique styles too. Anne Marie dances like she’s tripping on acid which ultimately devolves into spinning in circles until she falls over and pees herself laughing. Frank looks like he’s being electrocuted. And then it doesn’t get much better. And then he falls and pees himself laughing. So a lot of laughing followed by a lot of pee.

Now before Mrs Frank’s Place comes on here to take me down a peg let me say I can’t and don’t dance, aside from the Tennessee Waltz with Mrs Frank’s Place at our own reception. At a friend’s wedding reception I let Tracy talk me into going on the floor for a fast song. I was handed a dollar to go sit down. Dance career over.

But it does my heart good to see my kids dance in semi-public without a care in the world, no matter their style. By the age of five I was already subconscious about that stuff. So the way I see it Frank is ahead of the game. Thankfully my wife’s joy of life has rubbed off on them.

Unfortunately my joy of cleaning up has not rubbed off on them and they tried to welch on the deal. Eventually Frank’s ethics got the best of him and he went in the house and began the clean up. They say music make workers more productive so I offered my rendition of the clean up song:

Hey man, I never claimed to be Mozart or even P. Diddy. No matter, it didn’t really have the desired effect. Production actually slowed as midget #2 was belly laughing at her father’s singing voice. Needed a new plan.

Turns out Johnny B. Goode is a better clean up song and the youngest runt got to work. And by got to work I mean undoing everything Frank was doing and dancing simultaneously. Much to the protestations of Frank. 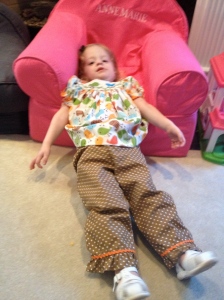 There had been an offer of a 2nd doughnut for a job well done. Ya get zip for unfinished work. Well Anne Marie toddled off and Frank did the job himself. When I asked who earned a doughnut he took another one for the team and said Anne Marie had helped him.

He was lying but I can live with that. We told him his job is to protect his little sister. He seems to be taking it to heart, at least when it comes to snack time anyway.

So back out on the deck for doughnuts and dancin.

That’s a Sunday I could get used to.

2 comments on “Doughnuts on the Deck”