Look, it’s no secret, I’m slow. Things dawn on other people faster than they dawn on me. Not sure why it is, it just is. So when we got through the decision making process, the evaluation, and the car lobby pick up line, I thought we were finally off and running. It really never occurred to me we would have to dance for our supper. Peep that picture. Can you read the Established date? Yeah, they started this in 1969, a scant two years after I was born. Yet somehow I was unaware of my pending relationship with The Book. And by that I mean selling coupon books.

Fear not my good friends! This is not a sales pitch. The season of The Book has come and gone. I specifically waited to write this one until after the storm had passed. Lest y’all think I was shilling for sales to get to that coveted 30 book sales plateau. With all it’s free ice cream in the cafeteria, buy one get one apple pie type product at your local fast food joint, and of course the name recognition, it was tempting to reach for the stars. But NO! We here at Frank’s Place have a modicum of dignity, and dram of self respect, waning as it may be. Read on, unencumbered by the burden of the dreaded sales pitch.

Much like Major League Baseball, a lot of the rules surrounding The Book are implied or unwritten. Were we required to sell any books? Were we required to buy a few to make it look good? Are their penalties, ramifications, judgements? The kid is shy. What if he comes up empty? Would the boy be shunned, ostracized, marginalized? Lots to stress over. I picked a bad year to stop abusing Pepto Bismol.

As usual when crisis’ of this nature arise I lateral to Mrs Frank’s Place. Besides, she’s in sales, this is her arena. My arena appears to be bringing mayhem and disarray to the car lobby pick up lane. A task I’m suited for, possibly even born for. Anyway I tagged out and Tracy went in.

She had a plan. Tracy decided she would take Frank door to door and he would “sell” The Book to our neighbors. People who, I wagered, would no longer speak to us. She felt it would be a good exercise to draw him out a little, give him some confidence, and help him learn to deal with people. It was better than mine, which was to write a check for 5 coupon books and call it a day, straight lines and shortest points and all that.

I mean door to door? Lets put aside the fact the kid barely speaks in public. Door to door? It’s just so 1950. Then there were the loyalties to The Sac to think about.

Ironically, my lofty position as the only stay at home dad in our Sac requires me to send out Sac Alerts; text messages to everyone on the street when sales people, faith peddlers, and any other unsavory characters come a knockin. So I was in a spot here. Do I send out a Sac Alert on my own kid? Do I out him to the neighbors or let them get ambushed, thus being derelict in my duty as rif raf runner off guy? It was a moral quandary to be sure.

In the end blood is thicker … yeah you know the deal.

So off they went, my 5yr old and my wife, out into the cold, cruel world of door to door sales. And as I’m sure most of you have already predicted, he did great. He made a sale at the first house. Our prince of a neighbor, JB, bought two Books from Frank. It was like blood in the water to a hungry shark. Now he was looking for doors to knock on. No one was spared. He cleaned up the Sac in short order. But he didn’t stop there. Like a deranged telemarketer, he began the process of hitting up our neighbor’s relatives by phone. Then he hit up the moms of his friends from pre-school, again by phone. Then with his moms help, he started working the members of the board of education in Knox County, snagging the chairwoman for a sale. Then he flashed his smile at the local flower shop. They were putty in his hands. Knoxville gang, if you’re not shopping Echelon Florist, well you’re probably a communist. No matter, Frank was a juggernaut.

For the record, we, the parents, only bought one. Just one. The other 24 he did on his own, door by door, person by person. 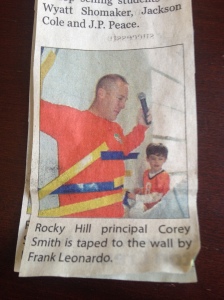 The pay off: well Mrs Frank’s Place was right. He did open up a lot and he does interact with the adults in the Sac much better. Plus, he was the lead sales-kid for his class, got to help tape the Principal to the wall, and got in the local newspaper. Yeah they butchered the last name, but hey not the first or last time that’s gonna happen.

As far as school fund raisers go this one is pretty painless and The Book turned out to be a teaching moment. Who knew?

Apparently most everyone but me.