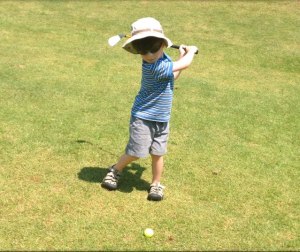 I’ll be carrying this kid’s clubs one day.

The Drive, Chip, & Putt Championship for kids is today, State of the Game address on Monday, player press conferences Tuesday, Par 3 championship Wednesday, and go time on Thursday through Sunday with 5 live streaming feed on Masters.org. Guess where I’ll be all week.

A Tradition Unlike Any Other.

Well, there are a lot of traditions colliding today.

First and foremost it’s Pops birthday. Passing on last month he would have been 87 today. He didn’t specifically turn me on to golf, just sports in general. We watched them all. The first football game I remember is a pre-season game between our Eagles and the Cleveland Browns, 1974 I think. A kid named Brian Sipe lit the boys in green up. It was also the first time I remember my dad yelling at the TV. The Eagles then, much like the Browns now, tend to elicit that response.

But it was in 1986 when I watched golf with any interest. That was the year Jack did what we wished all of our sports heros could do. Jack Nicklaus, at the age of 46, turned back the clock and won the Masters. Jack played the game the right way according to my dad. “No histrionics, he just hits the damn ball!” my dad would say.

My Dad didn’t even play golf. He didn’t care for it very much as a sport, but he liked watching it and at that time the giants of the game were dominant, Jack, Arnie, Lee Trevino, Gary Player. But play it, nope. Only twice in his life did he swing a golf club. He always told me the same two golf stories during the Masters.

The first time he got talked into golf was at a driving range. He went for the express purpose of keeping the guy from busting his chops about it all the time. So my dad, who was a big man, 6′ 2″ ish and probably 220, grabs a driver of all things for his first attempt at hitting a golf ball. A natural athlete, he of course crushed the ball, by his estimate about 250 yards. He was barely trying. He fixed that on the next swing and decided to hit it as hard as he could. The ball never moved, the club went 60 yds. It would have gone further but it hit the cart of the guy scooping up the golf balls.

The next and last time he ever played was at an executive par three course in front of a hotel he was staying at for work. It was a green with a few different places to tee off. Between the tee boxes and the green was a deep trench about 15 feet top to bottom and some 60 yards across. In other words, hit the green or the ball is in the ravine. 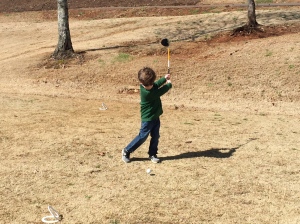 That ball is getting across the Ravine.

So the golf nut working with my dad who talked him into hitting on this 100yd par three, jacked his first four shots into the ravine. The guy felt like his last shot didn’t go too far down the hill so he went to retrieve it. He tells my dad to go ahead and hit.

Well my dad could be a bit of a ball buster too. So he swings his club, picks up his ball, and throws it across the ravine and it lands on the green. All in plain view of an older couple siting on a bench in front of the hotel watching the next Arnie and Jack showcase their skills.

When the guy crawls up the other side of the ravine and sees my dad’s ball on the green some 15 feet from the hole he starts hollering about how great a shot it was. My dad says, “I told you I didn’t play and wasn’t any good.” The guy was dumbfounded. My dad, with a deadpan expression says, “Well if I was any good it would have gone in.” The dude was crest fallen and the old couple probably wet themselves laughing. Yeah my old man could break balls with the best of them.

Somehow, in spite of all that I became hooked on golf. My addiction is due in large part to a couple of friends who taught me the game. Because of that my son Frank, named for his Grandfather, is also currently hooked on the game. Unlike his Grandfather, my little Frank can hit the ball. He has a great swing and he loves playing. He would rather go to the golf course than sit in front of the TV. His Grandfather would approve.

It’s also Easter Sunday. The first since my dad went to his eternity. If there is a more devout Catholic out there, I’ve never seen them. At my dad’s funeral there were several people who came through he viewing line none of us eight kids or my mom knew. Turns out it was the 7am weekday mass crowd there to pay respects to Frank, the guy in the first pew every week. They all had a story about how they interacted with my dad. They seemed as sad as we were.

My dad, the guy who was adamant about getting to church, the guy who once took the pew reserved for King Gustav IV at St. Peter’s Basilica for Midnight Mass in Rome, is now front and center with his maker on the first Easter Sunday since he went home.

We should all have such an eternity.

Well, it’s Masters Week too Dad. And here is your grandson Frank, playing the game the right way; no histrionics, just hitting the damn ball, featured on the Facebook page of one of his era’s giants of the game. I think you would approve. 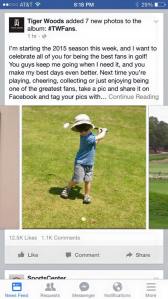 Literally left speechless when I saw this.