So as y’all may or may not know, I went back to work in October of 2015. It’s been an adjustment for sure. Aside from leaving the kids I’ve been raising for six years in the hands of Mrs Frank’s Place, I had to learn new stuff. After all, these people are paying me. With American money no less. I feel obligated to at least learn my new job. So I started adjusting.

First there was the time thing. I went from thinking about getting up around 7am to bolting upright at 4:30am so I can shower and be rolling to the J.O.B. by 5am. Then there is the whole not staying up till 1 am anymore. It’s not like I didn’t foolishly try that. But I keep passing out around 9:30 in the pm. I mean what’s next, taking my place in line at the Shoney’s early bird dinner buffet trough. As I write this at 11:30 in the pm on a Friday night, I am struggling to stay awake. And that’s as I’m actually hitting the keys!

Of course there was driving again, in traffic, in the dark. I had forgotten about the skills, or more accurately the lack there of, Knoxvillians posses behind the wheel. Gas pedal on the right, fast lane on the left, lets get it straight people.

If that wasn’t enough, I had to adjust to working and playing nice with people again. Well, if I’m being honest, I never worked and played well. So it wasn’t so much adjusting again as it was initiating adjustment. And surprisingly it turns out people are pretty cool. In fact it may be the main source of satisfaction of the job. (Yes some of them read this.)

But as it turns out the largest adjustment would involve, not surprisingly, golf. Going back to work would mean an adjustment to my golfing. Although not as much as I had anticipated. One of the things that made this particular job attractive was the 4/10 schedule. Friday’s off! Golfing would be unharmed. Golf watching on the other hand… 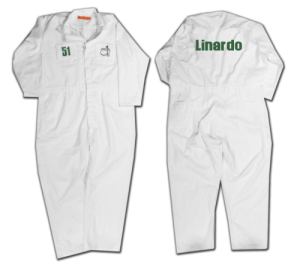 This would be the first time in 7 years I would not be home for Masters Week. I know! The horror right!? No scheduling would save that. I could watch the Drive, Chip, and Putt competition on Sunday but then would be radio silent until Friday. That would mean missing the player interviews on Monday and Tuesday, State of the Game speech by the Pres of Augusta National on Tuesday, the Par 3 contest on Wednesday, and the ceremonial tee shot and entire first round on Thursday.

I may have to quit. I mean, do they know it’s Masters week at work? Worse even, do they care? Not sure I could work with a bunch of godless golf heathens.

Now I know what some of you are thinking. Just take the week off. Look I’m an addict, but I ain’t stupid. No way I could justify taking 4 days off to sit around and watch golf. I can justify it in my mind all day long. But I don’t live alone. Burning my vacation for golf watchin may not be good politics currently. Someday…

No an adjustment had to be made. Since there is no way to watch a millisecond at work (Don’t they know it’s Masters Week?) DVR would be my friend. Well more like a step-sister I can’t stand really. I’ve never been one to watch live events on tape after I know the results. Also the advantages of DVR, mainly buzzing through commercials, is lost on The Masters. There are only two sponsors, usually AT&T and Coke. The commercials are very limited.

In 2003 Martha Burke and the National Organization of Women (NOW), protested Augusta National’s men only policy. To do that they targeted AT& T and Coke. Augusta responded by shielding it’s main sponsors by having no sponsors for that year’s Masters. You know what that meant? Yep, a commercial free telecast. Almost 12 hours of uninterrupted golf at The Masters. I’ve been a big Martha Burke fan ever since. My e-mails to her asking for another protest go unanswered to this day.

But if that little episode doesn’t make you love The Masters then I imagine you must be a communist. Augusta National literally said, “We don’t need outside money to run the biggest tournament in the history of the sport. Watch if you want or don’t, but we still playin golf.” It’s one of the endearing aspects of The Masters. Meanwhile The Masters has expanded to Sunday to Sunday coverage and an app that shows the entire week including a live camera on the driving range. Martha Burke on the other hand… She Gone.

So no buzzing through commercials and I already know who won the Par 3 contest. Alas better than nothing. Plus I did have a floating holiday to spend, so I was home on a rare Thursday to watch the broadcast on ESPN and the 3 live streams on themasters.org. Yes 4. And yes I had a monitor going for each one. Peep a little glimpse of golfing greatness. 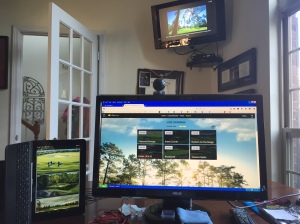 The struggle people, it is real.

Yeah that’s my setup. I ain’t ashamed. We all need a hobby. But now I have a J.O.B. too. So I’ll have to adjust. Maybe not for too long though. Presidential candidate John Kasich, Republican Governor of Ohio, has offered that the Monday after the Super Bowl should be a national holiday. He now has my vote.

I mean how long before Master’s Week is declared a National Week of Jubilee?