So I’ve been thinking of starting something a bit new here at Frank’s Place. Bearing in mind that I’m of the lazy sort, this was a decision I’ve been mulling (read procrastinating over) for a while now. Tales From the Tall Grass hits a few key buttons for me. It combines golf and writing. It occurred to me as I walk the fairways of the myriad of course I play, I run into and meet a lot of people.

As it turns out those people have stories. Even if they don’t think they do. And as I said I’ve only been mulling the idea of writing those stories. For one it would require some actual skill. I appreciate the compliments I get for writing Frank’s Place, but that’s just personal stories about the life of my kids and my role in their lives. Writing and articulating another person’s story is something all together different. Needless to say I was on the fence about all of it. Yeah I know, we should all have such tough decisions.

Well today cinched the deal for me. I played a rare Saturday round this week and met a pretty cool dude. What he was carrying finally convinced me Tales From the Tall Grass should be a thing. This thing won’t really be about golf aside from the rare bragging about my own game and some back-fill when the story requires it. No, these stories will hopefully be about the people I meet as a result of golf. And you’re in luck. The first installment begins now. Hope you like it. I know I do.

Tales From the Tall Grass: Hey where’d ya get that?

So a Saturday round of golf due to Friday rain allowed me and my weekly golf partner, John (his story coming in a later installment), to meet a fellow walker named Tom. Of course I’m not referring to walkers as in the zombie apocalypse, but to the rare breed of people who still walk the golf course instead of ride a golf cart.

Saturday’s are much busier and Tom, a walker, was paired up with me and John, also die hard walkers. We exchanged the typical pleasantries before teeing off and away we went. Tom and I hit uninspiring shots that missed the green to the right. As we approached we noticed the two golf balls in close proximity to each other. As is customary in this situation you ask the other guy what ball he’s playing, as in what brand. So you don’t hit his by mistake.

Tom says “I’m hitting a Titleist Pro-V1 #6”. For clarification, the ball is made by Titleist, the type is Pro-V1 and it’s stamped with a #6. And that was very odd in that I was playing the same ball, #6 stamp and all. Tom said “Well I’ll switch so we don’t confuse them all day.”

No need I said, mine has a Frank’s Place Logo on it so we should b…. “So does mine.” came Tom’s reply. 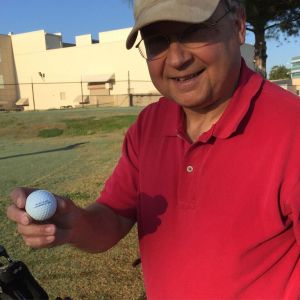 A lifetime memento to be sure.

“Yeah see? Frank’s Place franknfran.com.” Tom said very nonchalantly, as if balls with that logo are so common it was no surprise to him that we both had one. Well it was a surprise to me. I had those balls made in January with a gift card I received for Christmas. I had a dozen made and up to this point had only lost two or three.

When Tom saw mine with the same logo he asked, again in a matter of fact tone, “Hey where did ya get that?” I had them made bro. Frank’s Place is my web site. It’s a blog I write about being a stay at home dad, and now a back to work dad.

“Well what do you know I just met Frank!” Tom was so excited I almost hated to mention it to him. No bro, you just met Frank’s dad. He was still enthused. John and I looked at each other for the next two holes with the same What are the chances expression. So now it was my turn. “Hey Tom. Where did ya get that?”

“Right here on number 15. It was behind the green just into the tall grass.” The right here he was referring to was Dead Horse Lake golf course in Knoxville. It’s sort of our home course. As soon as Tom said where he found it I knew when I had lost it and the plethora of vulgarities that followed my exhaustive search and subsequent penalty shot.

So started the conversation with Tom the walker. It’s a great story to lead off with because Tom is also a talker and has an interesting story. The least of which; in the 80s he used to work at they very place I just started working, Y-12 National Security Complex. He worked wit people in the 80s who are still there today.

Now Tom builds energy scrubbers. It sounds like an extremely complicated process. Here’s a diagram just for your own edification. But don’t ask me. I tried to listen to the explanation right up until my head hurt. Needless to say the world needs these things and smart dudes like Tom build them. So it’s safe to say the world needs guys like Tom. And not only is Tom producing for society, he’s passing that legacy on to the next generation.

Gettin it on Battle Bots style!

The robots must navigate an array of obstacles and either assault or invade a castle. Here is where my genius comes in. I blurt out, “Like battle-bots!” You know, that show on Saturday mornings, where all these teams bring their killer robots into the arena, close them in a plexiglass cage and let them fight to the death. It was an awesome show. But, Battle-Bots is sort of like what WWE is to the sport of Greco-Roman wrestling. Kind of the same but not really close to the same.

Tom’s kid was on a team making robots that actually accomplished something other than bludgeoning another robot into the scrap heap. Once the castle scenario was done the robotics teams would join forces, trying to match their weakness with two other teams’ strength’s and continue the competition. I’m clearly not doing the topic justice. I can’t get the theme song from Battle-Botts! out of my head. I should have included it so you could be enjoying the endless loop yourself.

Anyway, Tom was thrilled about it as he should be. He had some good stories from the golf course himself. He’s experienced just about everything from a torn muscle that came completely detached from the bone to a hole in one; the holy grail of golf and golfers everywhere. When Tom tore his hamstring clean off the bone, his bros marked their balls right there in the fairway, got Tom to his car, pointed him in the right direction and went back to finish their round. Eight months later Tom tested his busted hammy on the ski slopes. That is an awesome story right there.

I would expect no more or no less treatment from the dudes I golf with. Hell it ain’t like I’m a surgeon and can fix him up. That’s what hospitals are for. But I am a golfer and the round won’t finish itself. I won’t show you a pic of a torn hamstring cause damn! I just googled that and now can’t un-see it.

All in all a good time was had by the three of us.

Tales From the Tall Grass. Yeah this might be a thing.

Sound off with thoughts on the first installment or the whole idea in general.

2 comments on “Tales From the Tall Grass: Hey where did ya get that?”