A little Christmas Eve eve post to lighten your night and bolster you against the enemy. Who’s the enemy? Well all those godless heathens who who claim to love Jesus but hate Jesusy things, like America and cool lasers that cover your house with Christmas lights, that’s who. I mean how much coal do you have to have in your heart to not like laser beams that make your house a green and red field of Christmas cheer?

Now I am a guy who leans traditional at the holidays. I like Como, Bing, and Burl Ives. And I like putting up the old timey glass bulb lights like we used to do when I was a kid in Jersey. They were big, they were colorful, they were gaudy. In other words, they were perfect. The installation of the lights left a little bit to be desired.

We may have bent a few safety regulations putting them up. And by we I mean me, with my dad at the bottom of the 20 foot extension ladder that had already seen better days, yelling at me to be careful and don’t rip the gutters off the house as I dangled from the second story roof, some 25 feet above the ground. I am honestly misting up just thinking about it. Amazing what you miss sometimes. But man we laid down maximum effort at Christmas.

I recently went to a fall protection class at my current place of employment. Ladder safety was a huge topic obviously. The instructor probably had a complex by the end of the class because I could not stop giggling to myself as we went over all the OSHA, DOD, and DOE rules and regs governing the safe use of ladders. If any of those agencies had appeared on our lawn in the winters of 1975 through 90ish, they probably would have hauled us both off.

I don’t really have that issue here in Knoxville because the various roof sections are way too steep and I’m way too much of a coward now. Much more so than I was back in the 70s when men were men. But still I string my big bulb lights around the garage doors and the front door. I festoon the deck railing in back with my gaudy, go to hell 70s colored light bulbs. I even manage a few strands in the hedges out front.

It’s really a lot of fun, but that fun doesn’t come without effort. As it turns out age is directly proportional to effort. The older I get the less effort I feel like giving. Consequently the less effort I actual do give. But I dig Christmas so I was in need of a Christmas miracle of lights as it were. In steps my Neighbor Mike. Whilst curbing our new mutt, (to be covered in a later post), in the freezing cold of night, I glance up and see Mike’s house lit with a strange pattern of small red and green lights. I knew I was tired but it then appeared the lights changed pattern and then swirled around.

In between cusing and then admonishing the puppy/mutt to get on with his business, I ascertain Mike must have some sort of futuristic device generating his Christmas display. I must have this. After a quick text, he informs me the Kroger has them on the cheap. Well damn-it, I’ll be carrying myself down there the next day. 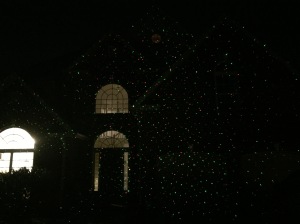 Can you not feel the Christmas in those lights?

He was right. The Kroger had them. I went more on the cheap and got the stationary type. No patterns or motion, just straight up old fashion laser generated Christmas lights. And damn if they weren’t festive all to heck. Once more, it only required un-boxing them, jamming the steak in the ground at the desired position and plugging them in. That’s it. Done. In ten minutes I was lasering Christmas all over my house. And God said it was good.

Mrs Frank’s Place on the other hand…

She loathes it. With the passion and heat of a thousand Christmas candles does she hate it. My somewhat snarky, somewhat actual suggestion that she just avert her eyes while she was outside with the mutt in the freezing cold night went over like a fart in church. So, much like my parents who battled non-stop over the position of the thermostat, me and my betrothed duke it out over the plug, that’s right singular plug, required to power the two lasers in my front yard. One freaking plug, how can you not like that? It’s a Christmas mystery.

It would be easy to make all kinds of Christmas villain comparisons here, like the Grinch or Scrooge or the Heat Miser, but it is Christmas after all. So let us just say Mrs Frank’s place lacks the vision and desire for a better society when it comes to Christmas technology. Even the mutt liked the lasers. He only tried to pee on them once. And frankly the lights look good on him.

As I have explained, I am as old timey as they come when Christmas is involved. But I’m way more lazy than I am committed to tradition. One extension cord instead of my life flashing before my eyes as I hang helplessly from a ladder and gutters made in 1967?

Yeah I’m good with new and sexy over old and traditional.