Twain has that famous line about his obit being reported in error. He dined out on that damn line for years. Well I’m here to tell you that cat is dead now, no matter what the paper’s say. Me on the other hand… 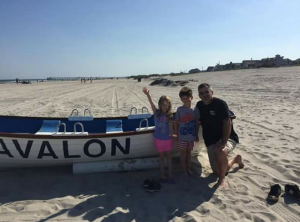 Proof of Life – the author and his kids. (The Frank of Frank’s Place is in the middle)

Yeah I’m still here. All evidence to the contrary, I did not fall off the face of the earth. Sorry to disappoint all you loyal members of the Flat Earth society, but it’s round, and it keeps spinning. No matter what we do, it keeps spinning. Now, some things may spin on without you. Take for instance the daddy blogosphere. It has hummed along nicely in my six month absence. There has been a shift toward video blogging or vlogging as the kids call it, but there are still writers out there defending the long form and kicking out good stuff. For that, and them, I am grateful.

This paragraph is where I’m supposed to regale you with tales of the exploits and adventures that have kept me from the key board these last six months. Honestly the only reason I know it’s been six months is the last post on the blog was my end of year Best of 2016 Posts post. And even more honestly, there has been no great reason, no wild tale to tell that would explain my literary solitude. In fact there is no tale at all, wild or otherwise.

If I had to pick a simple word to excuse the lack of stories here it would be work. Yep, that’s it. Just work. That word serves as an excuse, justification and simple fact all at the same time. I got a job in 2015. I got a promotion in March of this year. As much as I hated leaving the most important thing I’ve ever done in raising my kids, I love my new job. Other than the 4am wake up I can’t think of one thing I don’t like about it.

But the simple fact is, I haven’t had the gumption, the drive, the want to, that enables me to sit down and write. I don’t know how all those working dads blog on such a regular basis. Well other than the fact I’m extremely lazy and they aren’t. But that seemed too obvious an answer. I have no trouble getting up at 6am on my day off (Friday) to make my tee time with my buddy. But sitting down to bang on the keys was escaping me. And I have no idea why it’s not now. That’s not entirely true. I have a few ideas.

For one I’m on vacation in the motherland. Sitting on the deck of a beach house in South Jersey seemed like a good time to look at the blog and see what’s been happening. Yeah, did I mention I haven’t even seen my site in six months? Not a post, not a stat. Ignoring blog stats for a blogger is like depriving normal people of things like food, water or air.

Second, I’ve actually read a few other blogs this week and felt a little inspiration. One in particular is Skipah’s Realm. A good blog written by Gary Matthews, a divorced dad working and raising his kid and doing all the other things people do. He weaves his stories in a tapestry of analogy and metaphor with a good dose of humor. The big thing for me is this, the dude is a single dad with a job and he’s banging out stories on the regular. I don’t care if you like his style or not, that’s impressive.

So I’ve charged up the tablet, dusted off the key board and started tapping some keys. This is what has come out so far. At some point, probably this paragraph, I’m supposed to tell you I’m back. At some point I’m supposed to tell you I have story upon story que’d up and ready to type. Even if that were true I would not make that mistake again. Or again. I’m pretty sure I said I was getting my work legs under me and finding a good writing schedule and all that jazz. I’m more than sure I said it twice already. So no more.  I’ve got a few stories, some work, some home, some about this vacation. Who knows when if ever I’ll type them up. Hell I may never type again or I could bang out one a day for weeks. No tellin.

So for now let me say thanks to you all who have kept checking back. You’re loyalty will be rewarded, or you know, not.

How’s that for specific vagueness.

6 comments on “Six months in writers Siberia: excuses, justifications, and all that other jazz.”