Go time at the University of Tennessee!

Talk about living vicariously through your kids. The City Swim Meet at the University of Tennessee in Knoxville is the living definition of that. Having missed out on the traditional college experience I always enjoy going to the UT campus, which conveniently sits just 10 minutes from my house. The first pic is the kid’s events for the day to include time, heat and lane. There was my 8 year old in the program for a real live competition with hundreds of other kids from all round the Knoxville area. My nerves were waking up.

The kid? Well he could care less. Maybe it’s that deal where he’s too young to feel magnitude. For me the magnitude of this was enormous. Very soon after arriving I would be taking him down to this giant holding pen where he would await the call for his first race. As his races were all so close together I thought this might be the last time I got to talk to him until the end of the meet. That meant he would be on his own in the huge swim arena, jumping into that huge pool, racing all those other kids and the best I could do would be sit in the stands and watch, helplessly. You bet your ass I was nervous.

Keeping his head while all about him lose theirs.

There he is, in the 2nd pic, sitting like a Jedi in deep contemplation. Sat like that for almost 6 minutes. I only started to watch the clock after Mrs Frank’s Place texted to ask if he was nervous. I sent her this pic and then realized he had been like that for a few minutes. He had just returned from his first race, the individual freestyle, to the team tent, waiting for the call for his individual backstroke event. From that 6 minute meditation came this bit of discovery. Daddy, if they let me be on the team next year I’m gonna race the breast stroke too. So we were both feeling the moment. My moment was giving me irritable bowel syndrome, his moment was apparently giving him the taste for blood.

Honestly I started not to recognize him. I usually take him to the evening swim practices during the week. I’ve never seen him be very competitive. But after this weird little moment and then his backstroke event, I realized he was finally feeling the spirit of competition. In that race he started 9th. Of course he starts every race last because he watches the other kids and won’t dive until they do. He’ll never false start that’s for sure. But he puts himself behind right from the jump.  But unlike most meets and practices, in the pool at UT he found a new gear.

Amazing what a competitive atmosphere can do. Or maybe he’s juicing. Hard to tell.

By the halfway point he had drawn even with most of the field and I figured on a decent finish. But he kept going and touched the wall for third. He’s best finish to date. Shaved serious time off his previous best. I was ecstatic. He was more interested in the shaved ice truck sitting outside the door where the swimmers came out after they were done. I tried not to yell like a crazy parent. I can’t tell you if I did or not. I was in a bit of a euphoric haze. And I ain’t ashamed to admit it.

Don’t let the title fool you. It was a great event. We had a great time. It was well run and organized inside the arena. However, outside the arena, the staging area, the place I began to refer to as the pen, was at times bedlam, and most times utter chaos. In the midst of that chaos was one dude, a sentinel of sorts, already hoarse from the Friday events. One man against a tide of kids and screaming parents.

We had three kids going in the same heat in the backstroke. We went to the pen before they called for us. From his view it looked like a relay team and he motioned to me. They were in the midst of being overrun by relay teams of 8 and 9 year old boys and girls. Some squads had two and three relay teams. The commotion was caused by relay teams showing up without all four members. But mostly it was caused by parents trying to show they knew better than the sentinel. It was crazy. When the sentinel motioned to me I spoke before he wasted more of his dwindling voice. Hey man, we’re early. We’re not the relay team, just early for the backstroke, event 42.

The sentinel is in there somewhere. And this was a dull moment. It’s Lord of the Flies in there!

I got a quick nod of appreciation from the sentinel and he went back to stemming the tide of rebellion in his little fenced in island. I put an important mental note away for the future. When Frank’s relay event comes up don’t come to the pen without the full team and let the dude be the dude. I say this to Tracy all the time when we go out to eat. Let the waiter be the waiter we’ll just be the eaters. Well on this day we were just the swimmers. Some of the other parents had figured this out as well and you could see them standing back a bit waiting for the din to die down. That moment never came.

It wasn’t until the kids began to get past the sentinel and dictate to their parents what should be happening that I pulled Frank back to the other side of the lot where all this was going on. He was getting real tired of all this and I could see it was weighing on him. Finally the relay teams moved into the arena and it was Frank’s turn to enter the pen to wait for his race. When the sentinel came up to me I just had to ask him. Who did you piss off to get this job?  But the sentinel’s job is never done and he was back at the chaos, moving kids to arena. Time for me to get in there too. That’s where I watched my kid rip off a personal best and finish third in his heat after all that nonsense outside.

Later as the meet ended Frank’s coaches mentioned the same guy does that job every year. He actually volunteers for it. God bless that poor bastard. I assume the job gets a little easier as the kids get older. So this must be some sort of purgatory or something. Either way the sentinel was the real MVP that day. And because of him my 8 year old wants to drop boy scouts and fall baseball so he can work on his swimming for next year. 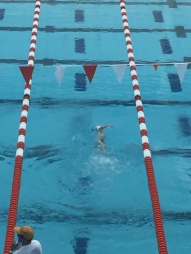 As one of my friends said, if Frank gets long like his grandfather, my dad, he’ll go far in swimming. I have no issue with that. It’s a great sport. And after this City Meet deal I’m hooked too. I mean look at the last pic. That’s Frank in Lane 7 in the same pool Michael Phelps and the rest of the 2012 Olympic swimmers trained in during the run up to the London games.

That is a small kid in a big pool. He’s just starting to find his stroke. I’d much rather walk golf course seeing his smooth swing but I admit I wouldn’t mind spending my retired years going to college pools to watch this kid swim.

Wonder what the sentinels are like at that level?

One comment on “City Swim Meet: Water World meets Lord of the Flies”