Well I did it. Finally cut off my Corona hair. Man it got long. And curly. And unmanageable. Even the best products on the market were no match. It had gone well past the stage of being a novelty and now a nuisance. But I felt a little committed or invested to see how far I could take it; how long it could get.

Now let me say right off, there was some vanity involved here. Several people said they liked it and thought my burgeoning Mr Kotter hairdo looked good.  I would suggest those people go for MRIs as soon as possible. Young people, see the Kotter pic for reference, or you know, get on the google. 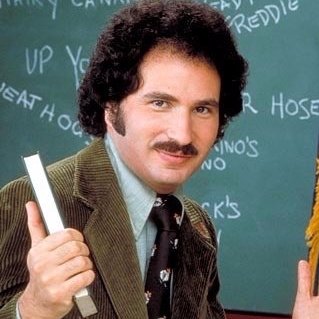 So yeah man, I’m not immune to vanity. Not to mention I’ll be 53 in a couple of months. I was intrigued and am quietly pleased that my hair grew that much at my age. So part of me also wanted to see if it would just keep on going. And surprisingly it did.

For context and comparison to the Gabe Kaplan pic over there, peep the pic that earned me the Mr. Kotter nickname from my wife. It’s a little grainy like a bigfoot sighting, but you can clearly see the hair helmet taking shape.

This shot was not long before I left for basic training at Lackland Air Force Base in San Antonio, Texas.

It just occurred to me I had the stash going as well.  It was the style man, what are you gonna do. A few short years after this picture, after having my head shaved and maintaining a very close cropped haircut, I had my first salon experience.

Needing a haircut bad before I reported for work, I was forced to go to a salon. And at the time I say forced because up until that moment I went to barbers only. In my mind salons were for girls. I was a red blooded fighting man. (In total honesty the Air Force did very little fighting in those days, unless you count the fighting for a good parking space at the BX.)

I grew up with Joe the Barber. Joe Mangiello cut my hair from when i was a little kid until I was an adult.  He cut my father’s hair. That’s where we got our haircut, at Joe the Barber’s. That’s it. There was never talk of a salon.

When Joe the Barber retired we found another dude to cut our hair.  A barber. But there I was, 23 years old and walking into a salon in the mall because I had no choice.  I needed to have my haircut.  It was an eye opener on several levels.

Did you know they wash your hair in those joints?  Once I got over resting my head in that weird sink, it became a … well i’m just gonna say it.  A religious experience would possibly be an understatement. I had no idea.

Now this was 30 plus years ago so I feel comfortable saying the following. The woman washing my hair was stunning to say the least. And she was washing my hair so I had that going for me.

She only had to squirt me in the face with that hose thing one time, as I was falling asleep. It was like massage therapy. Once that warm water hit my head I was light out. Almost. A deft shot from the little water gun rinser thing had me wide awake; and provided her a good laugh. Salons, as it turns out, are just win/win scenarios.

She sat me up immediately remarking that my hair was as healthy as she had seen and predicted I would die with a full head of hair. Now that prediction could have easily come true had I gotten smoked by a dump truck on the way home from that haircut, but I got what she meant.

She also said that my hair would not only keep growing it would take on the characteristics of a steel wool pad as I approached 60.  Well that didn’t seem very positive. But I was still basking in the glow of my hair washing so I didn’t really care.

Well hair stylist lady, if you’re reading this, you were right on the money. My hair is still growing strong at the age of almost 53. And because of that and the current pandemic it’s way down the back of my neck. And because of that I didn’t want to trust my three month overdue shearing to just anyone.  I was heading to a salon. Again. With a more than full head of gray hair in all its out of control gloriousness.

I was in the trusty hands of a good friend. Thank god. The Corona conditions were gonna be bad enough; mask, wait in line out side the joint, etc… I felt it much better to be in the hands of someone I knew and someone I knew to be a serious professional when it came to the craft of styling hair.

So there I was, in the parking lot of the Ross & Co. contemplating putting on my mask. I was looking pretty swarthy. Tanned up olive complexion from playing golf, slicked back hair.  I was looking like an extra from God Father IV. As it was Tracy told me in no uncertain terms, “The Guido look has to go.” Guido, for the ill informed, is a slur hurled at Italians that we have embraced as a term of endearment. The sting removed long ago.

Heritage slight or no, she was right. It had to go. The hair was killing me. I couldn’t stand the way it felt. Regardless of how some liked the long curls. It just wasn’t a good look.  It was taking a lot more energy to wash and, god help me, use conditioner. My damn arms were getting tired.

My second ever trip to a salon was not as eye opening as the first, but it still went well. And if you live in the greater Knoxville area give Courtney a shout at Ross & Co. She’s a hairstylist of the first order. After a surprisingly smooth 30 minutes, mask and all, I was back to my short hair. I miss Joe the Barber, but the salon trip ain’t half bad.

Unfortunately no wash this time.