OK, so it’s taken me a little longer than I thought it would to get my feet firmly planted on the ground after joining the workforce again. And yes, I’m aware raising kids is a full time job with no pay. I’ve been doing it since 2009 so all offended personnel can downshift and relax.

My hope is to get on a once a week schedule here. So check back next Saturday, I’ll do my best to meet you here. New job not withstanding.

Tons of stories emanating from my new place of business too. The irony, I can’t write those stories for several reasons. At some point I may be able to figure a generic, nonspecific to work function, way of telling them. But for now no dice. What I can write about are the events leading up to getting the job and what home life looks like now that I’m only in my home from 5pm to 4:45 am the next morning.

This is one of those. Enjoy.

A Night on the Tracks.

As a stay at home it turns out the work always comes to you, always. In the shower, a face appears pressed against the shower door. In the bathroom, a tiny hand appears under the door trying to pry it open. In bed at oh I don’t know, 5:30 in the am, a set of eyes stare at you out of the darkness like Children of the Corn. Work as a stay at home is always conveniently within arms reach.

We had a good run fellas.

Not so when someone hires you for a job. They expect you to come to them. Never occurred to me. I needed a new sled. The Starship Frankerprise would be staying with the kids. I would be leaving. That separation difficulty, mine not theirs, is another story all together. Never the less a new ride was in order.

So me and the Mrs hit the happy hour at Chuy’s and then went car shopping. Cause you know, drinking, nacho’s and driving new cars is a natural combination. Sort of like open flames and gasoline.

So off we went. Below is the recounting of that night.

“Oh I think we have a gallon or two, that should be plenty.”

That should have been my clue to park the car and exit immediately. But I’m an ass sometime so instead of being the smarter person I started calculating how far we may get from the dealership when the tank dries up and where might that be. Lots of roads, businesses, parking lots, etc… to choose from. Dead center of a railroad crossing never entered my mind.

So as we crest a small hill and coast down to a RR Crossing and then a T intersection, the car gets amazingly quiet. Since I’m driving I know what just happened. We’re out of gas. Now my calculations spin from where we’ll stop to, Oh crap are we going to make it over this set of train tracks. The sales guy, ever the optimist says no problems, we’re fine. My response, Really bro cause unless this thing just switched into stealth mode, we’re out of gas.  Took him a few more ticks than I would have thought to catch on to the implications.

Tracy was in the back seat and either oblivious to what was going on up front or she was in the Who cares I just had the 2 for 1 margarita special at Chuy’s mode. I think I was more amused at the sales guy. He just wasn’t cluing in to or not accepting the fact that indeed we were out of gas and had breached the track crossing and needed a good tail wind to get all the way across.

Thankful we had the law of inertia working for us and we slowly moved across the tracks. But of course now the steering wheel is like a block of cement and we are at the T. Sales guy says ok get us on the shoulder by the tracks. Now all of a sudden he’s aware of the danger but still strangely unaware of what happens to a car when it runs out of gas. He’s getting hyper because I’m not executing a barrel roll to get us to the side of the road. I’m not busting him in his cake-hole because I need both hands to move the wheel a 1/4 inch so we can slowly roll to the gravel shoulder by the tracks. Cause you know, WE ARE OUT OF GAS SALES GUY!

We finally come to rest on the gravel about 5 feet from the tracks. For all my northern brethren, this is the south. Train tracks are not guarded by fencing or any other barricade. You can cross a street and walk right on to an active rail if you want. So that 5 feet will come to mean something. Generally what it meant was sometimes the light at the end of the tunnel is in fact a train.

I see it first in the rear view mirror. I sarcastically say Oh look a train, just what we need, maybe they have gas. Sales guy stops his banter long enough to look in several mirrors to confirm it is a train. Good thing he was there. By the way, it’s the south. This is not a commuter train. It’s a 2 mile long chemical rail car train. How we were not flipped over or buffeted to pieces is beyond me. But the train did pass and we were able to put the windows down again.

That was a mistake.

Apparently a skunk, somewhere up the train line, had decided he was done with this cold cruel world and went towards the light. His odor followed the train about a minute after it passed us. The pungent was strong with this one. And just like that the skunk’s despair became ours.

A short 45 minutes later two people from the dealership show up. We were 3 miles from said dealership. Sales guy called the second the car came to a stop. Not entirely sure what was going on that required all that time to travel all that 3 miles. But they came with gas so at this point who cares. Sales guy says Oh it’s the general manager. I guess I was supposed to be impressed by that. Let me say if I have not already, I’m an ass. Three people would impress me if I met them: Chuck Yeager, Jesus, and Tiger Woods. And I’m not entirely sure of the order. The GM from a car dealership doesn’t even make the third cut of that list. But like I said he brought a guy who brought gas so who cares. Just filler up bub.

Upon seeing the gas can it occurred to me what took so long. They time traveled back to 1960 Mayberry so they could hit Wally’s Filling Station and borrow it from Goober. Didn’t even have a spout. They brought a funnel. It was a good looking funnel. Apparently it was not a functioning funnel. I say that because half way through the filling process the GM reached over his other sales guy and inexplicably grabbed the can. It, of course, disengaged the funnel and covered the GM and his nice suit in gas.

Well how could it not? At least the gas smell covered over the stink of despair from our dear departed skunk. So it should no be a surprise at this point to know they put the gas covered gas can in the trunk of the car we may buy. I guess that was better than one of those old pine tree air fresheners. We did make it back to the dealer without incident. Or should I say without further incident. 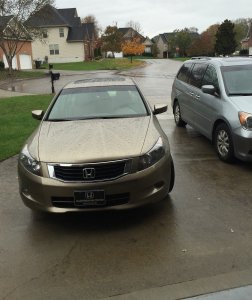 Old and new, side by side. No skunks.

I will say while we did not buy that car, it sold the next day skunk despair/gas fumes and all, we did go back and buy a similar car. The dealer is Auto Nation Honda in Knoxville and aside from this little tale they are great. We bought the Frankerprise from them and the service department is really the bees knees. Hard to beat waiting for your car to get an oil change while you eat from a complimentary dessert buffet and get a massage. Really, they have masseuses and fudge stripe cookies free for people waiting for their cars ! Fudge Stripes and a free rub down? How can you beat that?

So a little night on the tracks wasn’t going to deter us from getting my new ride. If you’re in Knoxville and looking for a car, do yourself a favor and go see them.

Bring your own gas can.