This Halloween has been a lot of fun.  At the age of 3 Frank is finally getting it and enjoying putting on his costume.  Big school party today so he got to show off.

Too cool for school.

Frank’s costume is cool.  I mean when are flight suits not cool on a 3 year old.  Especially when you consider the only thing not authentic are the boots he’s wearing.  The patches are all real and from my old unit in Jersey.  The flight cap is official Air Force issue and the LT Col Oak Leaf on the hat is from his Uncle’s Army uniform.  Frank added the sunglasses for show.  The boots turned out to be somewhat of a disappointment at first but then became funny.

We got the boots at the last second and for a steal. Patent leather boots for ten bucks.  So I slap them on this morning to send Frank off to school.  He takes one step and I hear a squeak like from a dog’s chew toy.  He starts running, and I get running dog chew toy noises.  The heels of these freaking boots have squeaky noisy things in them.  Frank loved it.  I didn’t.  I also didn’t think he teachers would be to fond of it either.  I sent  a pair of shoes along with him in case it started to drive them batty, but they were fine with it.  They said the noise of the class drowned out his boots anyway. However they called him squeaky all day long.  Gotta be careful with stuff like that.  One bad nickname can stick to you for the rest of your life.  You think dudes like being called stinky, or skippy, or tiny (normally a fat guy), their whole lives?  Anyway,  while Frank’s costume was cool and entertaining at the same time, his sister’s costume was awesome.

His sister of course is only 7 months old and could give a flying rats behind about halloween unless that means unlimited bottles and more nap time on daddy.  But that’s not to say she didn’t get into, or get forced into, the spirt of the whole thing.  She can’t go outside because it’s flu and RSV season, and those things are bad news for any little kid, but even more so for a preemie.  But Tracy wanted her to have a costume, so we had to come up with a costume.  Tracy came up with a great idea and Grammy’s unparalleled sewing skills came through again.

There was really only one appropriate costume for this kid to wear.  Check it. 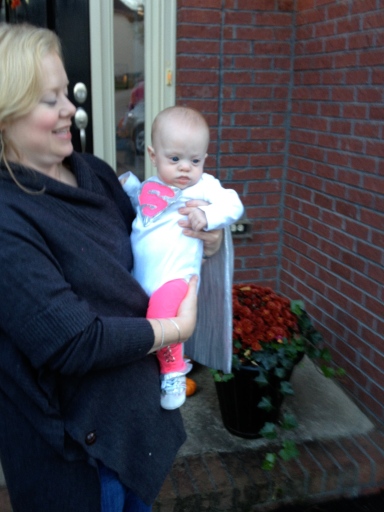 Here is the cape.

It was so obvious really.  She couldn’t be anything but Super Girl.  She’s been that for 7 months now.  She didn’t get to spend too much time outside.  Grammy brought her out to the halloween pizza party in our cul-de-sac but too may germy kids and the temp drove Super Girl back inside.

Much like Super Man, who was impervious to every weapon and every enemy ever, but could be felled by one little rock from his home planet, she can deal with heart surgeries, getting the wrong medication, no heart beat, no breathing, etc… but one little germ could be the end of her.  Just can’t risk the flu or RSV.  We’ve come so far, no need to screw it up now.

Even Super Girl has her kryptonite.

I never got to do Halloween much as a kid.  Went out a few times with my friends when I got a little older. We didn’t give out candy at our house much either.  I enjoyed that for the times we did do it.  It made me feel like we were more connected to our neighbors and the neighborhood.

Now we had a thing in Jersey called mischief night.  It was the day before halloween. That’s when you went out and toilet papered houses, threw eggs at cars, disabled school buses and settled scores if necessary.  Didn’t do too much of that either, but I did my share I guess.  It was a little more hairy for me, as both of my older brothers were local police officers.  Never got busted on mischief night, but we used to snowball calls in the winter too.  There was like five us hiding in the woods along RT. 40, a car came, we rose up and pelted it.  Turned out to be one of my brothers, in his police car.  Whoops.  We all ran like hell, yelling out instructions to each other to get our story straight, change clothes when we got home, threatening the weak sisters in the group we knew would snitch, etc…  Didn’t work.  Even though we couldn’t see the police car in the snow storm, he could see us.  ID’d all five of us.

Anyway, apparently mischief night is not a thing down here in Knoxville.  I asked someone about moving my car, keeping the outside lights on and all that.  They looked at me like I had five heads.  They never heard of it.  But halloween is a big thing here which is very cool.  Our neighborhood is a good spot for tricker treaters.  Lots of great neighbors and everyone gets involved.  Even before we had Frank we got into the “spirit” of things at halloween.

The first time we gave out candy it got busy and stayed that way most of the night.  Tracy was out chatting up the neighbors and I was on door duty.  My office at the house is right next to the front door.  So I’m pulling door duty and doing homework.  I was furiously typing a history paper that I’m sure was late or due the next day.  I must have really been banging away on the keyboard because I did not see the front door open.  All of a suddenly I feel eyes on me.  I look left from my desk and there is a three year old kid in a suit and tie holding a briefcase.  He looks at me like, “really bro” and says trick or treat with the most disinterested tone of voice I think I’ve ever heard. About a second after that, mini-Trump’s mom sticks her head around the door and starts apologizing.  I didn’t have a problem with it.  Kid knew what he wanted and went to get it.  I let him pick his own candy and he only took one piece, said thanks and left.

That was a great start to our halloween experience in Knoxville and our hood. It only got better when Frank came along.  Following are some shots of his costumes.  Only his first one was store bought.  We decided to make the others.  It was fun, but I now know why we may have skipped halloween when I was a kid.  His costume took a lot of time to do. Well I have 7 brothers and sisters.  Nobody has that kind of time or money.

2nd halloween in the Tomato. Home made and an homage to his mob name – Frankie Tomatoes

Another Little Gym after party costume. Doubles as glow in the dark jammies – nice!

Of course by his 3rd halloween he was heavily into Thomas and friends.  That’s trains for y’all living under a rock.  The train was quite the production but it was a ton of fun to do. He got raves around the neighborhood, which of course belong to me.  I was on door duty again, so the accolades fell on deaf ears.  So I’m going to give y’all a behind the scenes peek at the construction of Thomas. Compliment at will in the comment section.

In the paint shop

The face assembly goes on. Used my own eyebrows as a model

Thomas on the move

The complete get up

Not sure we’ll be able to top Thomas this year.  But here is a sneak peek at the lads 4th Halloween costume.

He wants to be a pilot.

Now the girl wlll also be in costume, but the diva attitude has started to set in, so she’ll require her own page once her costume is complete.  I believe Super Girl is the current theme under consideration. No doubt there will be a photo or two come Halloween night.