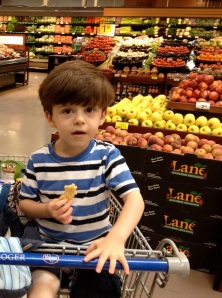 Tell it walkin you half a hippie

So Frank and I were making our usual Kroger run, and as always the folks there go out of their way to be nice to Frank. It’s not unusual for employees and customers alike to make idle chit chat with Frank. Me, well as a wise sage once quipped, they wouldn’t pee on me if I was on fire. I get it. Kids always make dorky parents way more interesting than they ever had a right to be. Eh, I embrace it. I get free cookies from the Kroger bakery lady just the same so what do I care if people talk to me just because I’m totin around a kid.

Anyway, we make the turn to the condiment isle and we pass two 30 somethings who seemed to be a couple. As it would eventually turn out they were a couple; a couple of chooches.

They looked strangely alike, not just in the face but they were dressed similarly and their hair cuts were styled in like fashion. They were a man and women but I got the impression they were trying to confuse the rest of us as to who was who. Whatever. I know two chooches when I see them, they come in all shapes, sizes, genders and colors. And these two were chooches with a capital CH.

They see Frank and smile and chuckle at him as if they were amused to see a child in the grocery store, or if they felt the idea of having children was cute or novel. They had that annoying attitude of people who think they have life all figured out and the rest of us are just flailing about. That’s irritating and I don’t like being irritated whilst I shop the Kroger. I decide there will be a reckoning.

Frank said Hi, but they didn’t say hi back. They said something on the order of “yeah man.” I couldn’t tell so I asked what Frank what the lady said and he replies, “That man said cool.” He was pointing at the woman and he wasn’t using his inside voice. I love that kid.

I care not for their response to this so I go about grabbing up my 2 for $5 ketchup Kroger special and off we go.

As fate would have it we would meet again. They get in line behind us at the checkout. How quickly the wheel comes round.

They are still chuckling, about life in general apparently. I guess they are happy to be happy or maybe my fly is down. It’s 50/50 at this point.

Frank was really not sure what to make of them and of course had no idea what they were talking about. The lady in front of me has yet to start filling out her check for the $8000 of groceries she’s about to buy so I’m stuck for a bit. So I decide to stare at the hipsters while they try to talk to Frank.

In my staring it hit me. Similar hair styles, just on the edge of being able to wear skinny jeans but went for it anyway, amused at the world and those of us that live comfortably in it; holy crap it’s a couple of hippies. But a new age type. Shaggy hair but clean, clothes were neat, no foul or cannabis smells…hipsters, a couple of hipsters are behind us in line at the Kroger. Now I’m amused. I mean not watching monkeys throw their feces at the zoo amused, but close.

Here is what the Urban Dictionary has to say about hipsters.

Asymmetrically androgynous, yep that’s them, except for the ignorant attitudes of mainstream consumers part, since ya know they were shopping in the same place I was.

They finally get around to asking Frank his name. They were amused at that too. “He’s like a little man.” Yes, yes he is.

Then they step on to my turf. “Hey Frank make sure your dad gets you a Blo-pop. Lots of good sugar in them.”

Now look, I have learned to bite my tongue a lot since having kids but if you’re gonna tee it up for me, I’m swinging. “Hey Junior, you gonna pay for that sucker you’re telling him to ask me for?” I think they were free at the checkout, who cares. It took hipster boy by complete surprise and at the end of the day isn’t that the whole point of this exercise.

Man that kid didn’t know what to do. All of a sudden he looks me in the eye for the first time and he is no longer amused. He literally had no idea what to say. Since he was skipping his turn, I went again. “Do you know me?” For a second I thought oh lord what if these kids are parents from soccer or pre-school and I actually do know them or should know them. This could be bad. No one is dying, but it could get extremely embarrassing if he says, Oh yeah I coach Frank’s soccer team. Trust me that’s not out of the realm of possibilities. I’m that dumb.

Off the hook, he doesn’t know me. So my next question is “Lot’s of good sugar, really, to a kid you don’t know?” That’s it. That’s all I said and it was said in a curious fashion, not a don’t talk to my kid fashion, I guess. No matter, he mumbled something about it being funny and was able to finally break eye contact. He then sought solace in the three feet of personal space provided by his hipster type wife. She appeared to be no longer amused either.

I on the other hand was much more amused then when I first ran into them, by at least half.

Hipsters in Knoxville, God help us all.