So swim team. Yeah. Swim team. I’m just at a loss here. It’s a great thing but I just did not see that coming. Sure the kids love the pool, they like “swimming” if you can call it that. But swim team sounds so official, and hard, and ya know might require some ability.

Let’s just face some facts here. Or at least let’s face one very important fact; the freaking kids can’t swim. There I said it. They can not swim. So swim team seemed a bit ambitious. Swim lessons sounded more reasonable. But as usual Mrs Frank’s Place would not be swayed. She was on swim team as a kid so our kids will be on swim team. End of discussion. Ok then. Great dear. Good talk.

Off to swim team we go. Oh no not Mrs Frank’s Place. No, I took the day off from keeping the world safe for democracy (not really) to schlep the kids down to the community pool for their first day of swim team. One thing is clear from the outset. My absence since returning to work has had a profound affect on the timeliness of my children’s arrival at various events. That is to say they went from being 5 minutes early to being late a lot. So much so that they were a bit flustered when we arrived at the community center 10 minutes early.

What do we do now? Why are we so early? How long till we can get in the pool? Those were just a few of the whinny supplications raining down from the back seat of my car as we sat in the parking lot. Funny thing, I didn’t get mad. I started to miss being home. When we finally dismounted and headed into the pool area and the other moms started showing up I saw a few old friends from my days of toting the kids around to school, soccer practice, the Kroger, etc… Then I really missed being home.

No time to get misty. A very hip looking dude, about 14 years old if he was a day, sauntered up and introduced himself. Not to me, but to Frank. That impressed me right away. Coach Joe, a stately 3o-somthing years old, turned out to be an impressive character. I didn’t know it then but the kids were in good hands. He showed Frank where to stand to warm up and off they went. I took my seat and watched nervously. We were at the Arnstein Jewish Community Center and this joint was big. The pool was big, the school was big. It was all big and my Frank is small.

It also appeared like there was no spot for beginners. It looked like Frank was going to be tossed into the deep end with everyone else. And by the way, Frank was the only newbie. All the other kids were returning from last year. I’m not feeling it at this point I don’t mind telling you if he had walked over and said he wanted to quit, I would have said OK lets go play some golf. I even stuck his golf stuff in the trunk for just such a contingency.

As it turned out he did get tossed in the deep end. Lane 1, 12 feet of water, everyone 6/7 years old into the water and swim a lap. For you land lubbers a lap is up and back. It’s an Olympic size pool. Did I mention Frank can’t swim? Not a stroke. Although I’m having enough of those for both of us. I quick like leave my mom friends and hustle to the lane 1 side of the pool. I’m half way there as I see my very timid 7 year old just jump in, no swimmies, no nothing, and no mention to coach Joe that he can’t swim. Just jumps in and starts to paddle.

Like an old Corsair coming off the deck of the USS Hornet circa 1942, Frank disappears below the horizon and I freeze, waiting for him to rise up into the sunlight as he gains altitude. No such grandeur. A few paralyzing seconds later as I’m really moving now, his head pops up and he is moving his arms fast enough to fly, but it’s just keeping his head above water. Not a soul is freaking out about this except me. Plenty of people can see him but no one is reacting.

So I sit down and watch. His head is staying above water and he is giving maximum effort. He has moved about a quarter of the way down the lane. The other kids are sitting at the other end waiting for him. They all glided down there like they had fins. I’m really close to shutting this all down and then I see the pic above.

The kid is ecstatic. I’ve not seem him smile that broadly since the day his sister finally came home from the hospital. No way I can stop it now. So I wait and he makes it to the other end. While Frank was giving all he had, the other kids were conspiring. They had decided they were not making the return trip. When one of the assistant coaches, wearing her college swim team pullover and dark shades, went to administer a beat down, a young lad got in the first lick.

Hey lady can we get some noodles over here?!? We’re just kids ya know! If that wasn’t enough to make this kid my best friend, his follow up question as he paddled to the other end leaning on a noodle he just received cinched the deal. Hey lady, is there a chik-fil-a around here anywhere. This is my new favorite kid. No contest. However, college swim team coach didn’t get the joke and gave him the community center policy of no food in the pool area. No sense of humor in college anymore I guess. But he wasn’t done. As he swims past where I’m sitting he looks over at me and moans, This is the worst day of my life. Ever! I swear to you had I known swim team was an hour long I would have run out and got that kid some chik-fil-a.

Still the kid appeared to be gliding through the water while Frank was barely staying alive. Then one of them got out of the water. They were, in fact, wearing swim fins on their feet. Frank’s mom is old school so I knew there was no way he would be allowed to wear them. But it really didn’t matter. He had a noodle and and then a kick board. He plodded along, up and back, up and back. He swam 20 full  laps in an hour. I was stunned and extremely proud. He was dead last the entire time but he never stopped. That was huge.

I was exhausted watching him. But he never stopped. By the end of swim practice he was hooked. Unlike soccer or baseball, swim team was every day. Plus you could come at night as well. Add to that the bonus of two nights a week practice was held at the University of Tennessee Aquatic Center on campus, where the 2012 Olympic swim team practiced leading up to the London games. Pretty cool stuff. Kid even got to swim in a meet there. Yeah I said swim in a meet.

By mid summer he was competing with his team, the Smokin Salmon, (not kidding). And by competing I mean actually swimming in meets against actual opponents. One of his first meets was in the a fore mentioned pool at the University of Tennessee. I mean hell, that ain’t bad for a kid who can’t, or should I say couldn’t swim.

Hard to say enough about Coach Joe and his gang. Just an impressive dude who got maximum effort out of my kid. To see Frank swim laps for an hour and then be ready to go do it again the next day was just astounding. It’s also a testament to the way Coach Joe can motivate these kids. He’s just a kid himself for goodness sake but the proof is in the pudding.

He believes he can fly.

The pic to the left is the icing on the cake. Frank is a kid so scared of heights I can’t give him a piggy back ride without putting him in a climbers harness and employing two spotters. Safety first. But just peep that shot. He’s jumping off the diving board without assistance or me throwing him off.

I was standing near Coach Joe and one of his assistants and they were marveling about two things. One, how far Frank had come from his first practice. The second? They were amazed how Frank could even jump from the board and still managed to keep his hair from going under water. Apparently Frank would swim the whole practice without getting his hair wet. I could have sworn his head went under the water when he jumped off the board. But when he climbed from the pool he had huge smile on his face and his hair was barely wet. Not sure how he was doing it but he was clearly intent on keeping his rug dry. 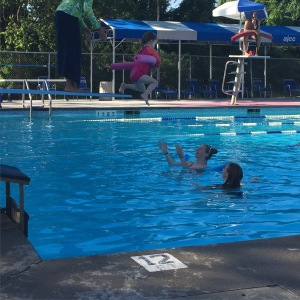 Here is a little more proof of Coach Joe’s inspiration. This is my then 3 year old. If you’ve read this blog for any length of time then you’re probably aware of her situation. Born at 25 weeks, weighing in at 1lb 9oz, she didn’t have much of a chance. In fact her twin sister, Linda Claire, died the day they were born. So it might have seemed a little overly dramatic to most people there watching, but I made a bit of a weeping ass of myself when Anne Marie jumped from the diving board into the deep end. Someone was apparently cutting onions near by.

Small victories people, small victories. And in the end swim team was a big victory. They both loved it, they both got serious exercise for over an hour five days a week during the summer, and they both competed against and with serious competition. The best part, there wasn’t a participation trophy in sight, just hard work.

Well hard work and the occasional post night practice ice cream. But that was more for me than it was them.

A little Menchie’s after swim practice.