It’s time for another t-shirt give a way at Frank’s place.  T-shirt give a way #3 winners were a little stretched out.  Tracy, (another Tracy not my wife), who blogs at makingthetrek, won in May for guessing the item Anne Marie was wearing that indicated she had grown very big.  Dave Welty and his entire prayer group, 12 faithful men in all, won in late June for just about praying Anne Marie out of the NICU.  Plus Dave has been giving me some inside info to help me get my book published.  And his daughter, a good friend of Frank’s Place, asked me to.  And yeah, there was bias involved in that selection – sue me.

We have used a few different formats to pick winners.  This month is a newer format still.  Randomness.  I gave Frank a list of the people who follow and comment here at Frank’s place and he randomly selected 4 lucky winners.  He may have just been reaching for some M&Ms or as he calls them “nems”.  Either way his sugar induced shakes caused his hand to land on 4 winners.  As I have said before this is not some dumb reality show that creates a stupid crescendo only to go to commercial right before announcing the big thing.  We get right to it.  The winners are as follows:

From Indiana by way of Buffalo – Mike Muhleisen! Congrats Mike.  You might remember Mike from his comments to the post Wealth redistribution and the cookie exchange explained…by Frank.  Probably not.  Congrats anyway.  Send me your shipping address and shirt size to franknfran0967@gmail.com

From the middle of nowhere Tennessee – Zona Ash!  Zona, a friend of Frank’s Place and frequent commenter, is retired from the United States Air Force after a 20yr career.   Size and shipping address to franknfran0967@gmail.com

And from right here in Knoxvegas, Knoxville’s favorite daughter Laurie Halsey!  For the longest time I thought I was alone in my love of Little House on the Prairie and all things Walnut Grove until I met Laurie.  I would hazard a guess that we are the only two in Knoxville who can converse equally on politics and the adventures of Ma and Pa Ingalls.  If you don’t know who they are or where Walnut Grove is you’re probably a communist.

Congratulations to all the winners.  Please send me a shirt size and for you out of towner’s send a shipping address to franknfran0967@gmail.com.

Take a look at the shirt and new logo below. 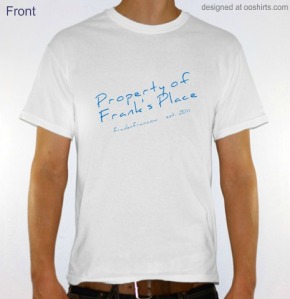 To be eleigible you must be either a member of Frank’s Place by submitting your e-mail in the space provided under Get It Fresh Off The Belt! or be a frequent commenter.  Get your name on the list somehow.  Don’t miss out!