I’ve learned a lot of things since I’ve gone back to work. For one, I’ve learned that I am too frigging tired to do almost anything but work. I’ve learned that 4:30 am is not a wake up time you can adjust too. That’s right gang, it does not get easier, or even tolerable for that matter. I’ve learned I hate Knoxville drivers even more than I thought. And that includes the three other people on the road at 4:55am. But even all that pales in comparison to the most stark lesson so far since returning to the workforce, bathroom etiquette. 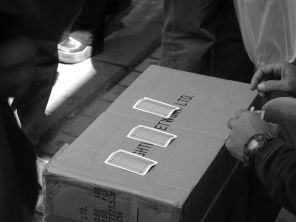 Can you pick the winner? Well can you?

Specifically, in an office environment, what might be obvious bathroom etiquette to some is a universal law just meant to be broken to others. That is to say, going to the bathroom in a 21st century office environment is a world onto itself. A world with its own rules and its own rule breakers. Much like the popular street game, Three Card Monte, selecting the proper bathroom stall takes a little guile and a whole lotta luck. And chances are you’re still gonna lose.

In Three Card Monte you may drop a ten spot. If you’re a serious player, meaning an easy mark with no regard for your family’s next meal, you may even drop a hundy for not finding the Red Lady. But fail to find the proper stall, you’re gonna lose something way more important.

A while back I wrote about how awesome our master bathroom was because the toilet had it’s own room. That meant three doors between you and any outside interference while you commenced with the business of doing your business. Read it here if you’re so inclined: Three Doors to Solitude. I had no idea how prophetic that post was. I’m not sure I can convey the passion for which I miss those days.

The winner is in there somewhere.

Failing to select the proper stall means a neighbor in the crapper. And I can’t like that. Now don’t get me wrong, I am not exaggerating when I say I love my neighbors. Nothing I wouldn’t do for them… except do do next to them. Yeah I love them but I don’t want to use the joint sitting side by side with them. I’m betting the feeling is mutual.

So failing at Three Stall Monte means no solitude, no semi-privacy, and in some cases no dignity. As it turns out there is a whole set of rules for selecting the proper stall. The rub or gamble is this; will the dude who comes in after you honor those rules? If he does then he’ll take the stall at the far end, leaving the appropriate amount of man space between you and him. If he has no honor he’ll march right down the line and sit in the stall directly next to you. And if he does that you can probably kiss a charity flush goodbye too.

Why? Why does he do it?!? There are perfectly good stalls at the other end with no one in sight. Why must you walk the extra yardage and sit next to me. For the love of all that is holy… But that is a study for another medical journal.

Look man here are some basics. If the freaking bathroom has more than one stall and they’re all empty, take the one at either end. Preferably farthest from the urinal, as a courtesy to those just doing a drive by. Don’t under any circumstance take the center/centerish stall. That’s just arrogant. If one dude is in there already, keep at least one empty stall between he and thee. It’s just common sense dude. If there is only one stall open then all bets are off and you are on your own. Good luck.

Quick, you walk in the men’s room and there are 5 stalls. Some dude is in stall 3 as you look at them. Which stall do you pick?  Too late. You lose. Had you said, “I’d walk to stall 5 while muttering about the doofus head who picked stall 3 when he could have had either end stall.” you’d be a winner

But so it goes in the mean streets of corporate American bathrooms. Pick right and you’re a winner.

Pick wrong and you crap out.